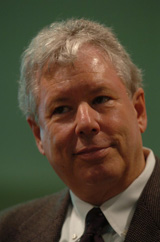 As the global economic downturn and health care reform in the United States continue to make headlines, the book “Nudge: Improving Decisions About Health, Wealth, and Happiness” has never been more relevant to American readers.

Now translated into several Asian languages including Korean, the book presents the ideas of two University of Chicago professors, Richard Thaler and Cass Sunstein, to a new audience on the other side of the world.

Thaler was in Seoul this week as part of a six-city Asian tour, organized through the alumni affairs department of the university’s Booth School of Business, where he is the Ralph and Dorothy Keller distinguished service professor of behavioral science and economics.

Speaking about Nudge in an interview, he explained that the book is based on how people make decisions - which, he observed, often results in poor choices.

“People are imperfect, but it’s possible for them to make better decisions if we structure the environment in which they make choices,” Thaler said. “The goal is to nudge them toward better choices,” he added, hence the title of the book.

In his work as an economist, Thaler noted how textbooks in his field often base their models on the ideal human, one capable of achieving the greatness of Albert Einstein or Mahatma Gandhi.

“But the old method wasn’t working. Economists were making pronouncements based on the fiction that people are completely rational,” he said.

Sure enough, as the world has seen all too well recently, regular people are vulnerable to making bad decisions, such as the Americans who took out subprime mortgages they couldn’t afford or the Koreans in the early 2000s who, as a nation, collectively racked up some $100 billion in credit card debt, only to default on their payments.

Published in March 2008, six months before the fall of Lehman Brothers, the English-language version of Nudge demonstrates a nearly uncanny prescience with its advice on wise investing and accruing savings. Although current events support the authors’ ideas, they’re “not celebrating the financial crisis,” Thaler said. “But the financial crisis has caused people to express an interest in a new approach to economics.”

One tenet of this new approach is user-friendly design, especially as it relates to government regulation of companies.

“We should require businesses to be as truthful as possible with the information they give to people,” he said.

In the case of credit cards, he suggested that regulations should be supplemented by readable disclosure. “Credit card companies should e-mail you information including 1) all the ways they can charge you [ie., late fees, foreign currency transaction charges], and 2) all of your activity that incurred charges,” he explained. “You should then be able to upload that information to a third-party site to shop for the best credit card for you.”

Written in rather conversational prose, Nudge’s principles are applicable on a smaller scale, from the design of a restaurant’s menu to the layout of an elevator’s buttons.

“More economics books are trying to appeal to the general public, and those are the ones that succeed,” he said. After all, “nobody’s interested in reading about the dismal science.”

The book’s user-friendly concepts have proved popular among some politicians, such as British Conservative Party leader David Cameron and President Barack Obama. In fact, Obama appointed Sunstein - Thaler’s co-author, who teaches at the University of Chicago and Harvard law schools - to the post of regulatory czar in April.

No word yet on whether Lee Myung-bak is a Nudge devotee, but Thaler said he’d be pleased if the Korean president reads the book and adopts its ideas. “But it’s also great if a mother reads it and figures out a better way to raise her 3-year-old,” he added.

The Korean version of Nudge, translated by An Jin-hwan, was published in mid-April by Leaders Books. Since then, Kyobo Book Centre has added it to its list of recommended books.

For more information on Nudge, or to access the blog maintained by Thaler and Sunstein, visit Nudges.org.