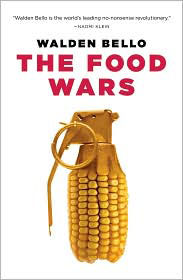 Neither the recent global food shortages nor the impending world energy crisis will be unfamiliar to readers, yet the link between the two has only recently been discussed.

Walden Bello, renowned activist, academic and voice of the global South, situates the origins of the current food crisis within the neo-liberal reforms occurring on a global scale, describing the marginalization of the peasantry by global systems of production and distribution that service mainly the world’s middle class and elite.

Partially caused by the diversion of food crops to biofuel feedstock, the crisis, for Bello, has its roots in the destruction of peasant-based agricultural systems through structural adjustment and trade liberalization.

He examines this phenomenon through various case studies in Africa, along with longer case studies focusing on China, the Philippines and Mexico.