Korea gaining recognition as a location for film

Korea gaining recognition as a location for film

The cast and crew of the 2006 film “Chakushin Ari Final” shoot a scene from the movie at the Commodore Hotel in Busan. Provided by the Busan Film Commission

Foreign film crews have become a more familiar sight around Korea in recent years, with an increasing number of production teams choosing to make their movies here.

While the increase in foreign film production activity seems sudden, it is no coincidence. In the last two years, the film commissions in Seoul and Busan have launched incentives they hope will help attract foreign filmmakers, such as financial subsidies, administrative assistance and first-class production facilities. And it’s working.

The country is gaining recognition as an affordable location for film production, and many of the films shot here have gone on to box-office success, particularly in Asia.

Two of these films will be on screen at the 14th Pusan International Film Festival next month and several others are set for release later in the year.

While the film industry has not yet built the infrastructure to support something as large as a feature-length Hollywood production, things are moving in that direction, which could cast Korea in a whole new light.

In a bid to have more foreign films shot here, the Seoul Film Commission, under the Seoul Metropolitan Government, began a new policy in 2007 of reimbursing foreign films or joint productions involving Korean partners 25 percent of production costs incurred in Seoul, up to 100 million won ($80,515).

The commission also supports foreign film production teams by helping them with administrative procedures and location scouting. It also covers accommodations and airfare for those involved in productions planned for Seoul.

“We see the reimbursement as a form of place marketing, which we hope will draw more tourists to Seoul and Korea as well as give a boost to the Korean film industry,” Kim Mi-hye, head of the location team at the Seoul Film Commission, said. “Because the local film industry has been in a slump, it has become more important to bring more foreign film productions to the country.”

A number of foreign films have been shot in Seoul this year alone, including two that will premiere at the Busan festival - “Tokyo Taxi” (Korea/Japan, 2009) and “A Brand New Life” (2009).

Tokyo Taxi, directed by Kim Tae-sik, has scenes shot in such places as Incheon and Gimpo international airports and Deoksu Palace, among others. It follows the lead singer of a rock band in Japan who is afraid of flying. When he is invited to participate in a music festival in Seoul, he tries to take a taxi. The film will have its world premiere in Busan.

The French-Korean film, “A Brand New Life” (2009), is the story of a Korean child sent to France for adoption. The film, directed by Ounie Lecomte and co-produced by acclaimed director Lee Chang-dong, contains vivid images of Korea, ranging from shots hanok, a traditional house, to a rundown school. The film premiered at the 62nd International Cannes Film Festival in May and, in addition to being shown at PIFF, will be released in seven countries including France, Hong Kong, the Netherlands and Belgium.

The Thai film “As It Happens” was also filmed here this year. The romantic comedy follows a series of accidental encounters that lead to romance between a travel agency executive and young woman traveling around the world. The movie, slated for release in Thailand later this year, is expected to attract attention there for its cast, which includes two popular local actors, singer-actress Nattaweeranuj Thong Mee and actor Navin Yaowapolkul. It was shot in Korea in August and about 10 minutes of the 90-minute film take place in Seoul at locations including N Seoul Tower, the Myeong-dong shopping district, Cheonggye Stream, a Han River cruise and the Seven Luck Casino. 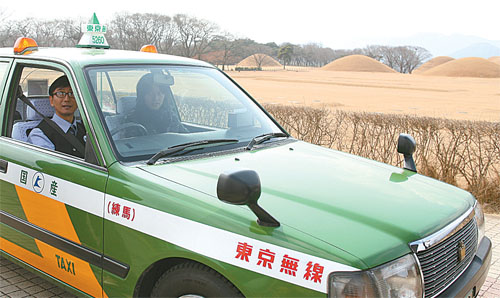 A scene from “Tokyo Taxi”, which will have its world premiere at the Pusan International Film Festival in October. Provided by the Seoul Film Commission

The Korea Tourism Organization was integral in convincing the producers to shoot the film here.

“After we learned about the film, we contacted the producers through our branch in Thailand and persuaded them to film in Korea,” said Jeon Hyo-sik, the Asia Ocean team director of the Korea Tourism Organization.

Another film that was shot here this year is a Korean-American film currently in production, “The Wedding Palace.” The film is a romantic comedy starring Korean actress Kang Hye-jung and Korean-Japanese American actor Brian Tee. The film, directed by Korean-American Christine Yoo, is about the romance between a Korean woman and an Asian-American man and will feature scenes from a traditional Korean wedding as well as a tourist attraction like N Seoul Tower.

“We’re trying to get more of the film shot here,” said Kim of the Seoul Film Commission.

Seoul is not the only place in Korea featured in foreign films or international collaborations. A number of films have also been shot in Busan. These include the Japanese films “Hero” (2007), “Twentieth Century Boys” (2008), “Kisarazu Cat’s Eye: World Series” (2006) and “Chakushin Ari Final,” which is also known as “One Missed Call Final” (2006); the Japanese-Korean film “26 Years Diary” (2007); the French film “The Intruder” (2004); and the Hollywood film “The Legend of the Dancing Ninja” (2009), starring former “Baywatch” star David Hasselhoff.

“These films were shot in Busan because they are set in Korea or Asia, or because there are scenes that cannot be shot in the country where the film is actually set,” said Yang Seung-yeong, chief location coordinator of the Busan Film Commission. “Korea has gained recognition around the world through events like the 2002 Korea-Japan World Cup, and there are more filmmakers who want to shoot their films here.” 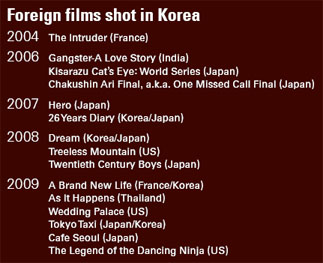 The producers of Twentieth Century Boys decided to film in Busan because part of the story is set in a casino and there are no casinos in Japan, according to Yang. The film also contains a scene in which a Japanese criminal escapes to Korea.

The city of Busan is also working to attract filmmakers. This year, the Busan Film Commission introduced an incentive similar to the one available from the Seoul Film Commission for foreign films shot in the seaside city. The organization reimburses productions for up to 30 percent of production costs expended in the city, up to 100 million won. It also provides up to 10 days of accommodation for up to four staff members who use the city’s new postproduction facility. To generate interest in the city, the film commission will invite Asian filmmakers to tour the postproduction facility, studios and various locations in Busan and South Gyeongsang next year.

The postproduction facility in Busan is the first of its kind in Korea and provides everything from digital intermediate to computer-generated imagery. It opened in February, and construction of sound and editing facilities will be completed in 2011. 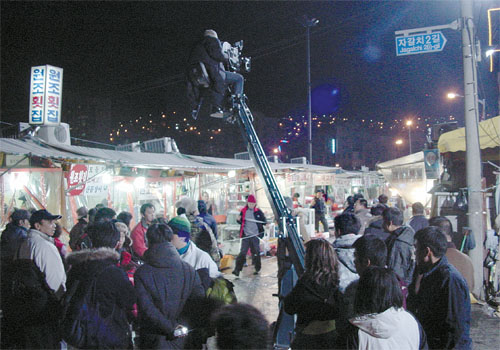 The cast and crew film a scene from the film “26 Years Diary.” Provided by the Busan Film Commission

“We hope to boost Busan’s film industry by creating an infrastructure for film production,” Yang said.

These examples may generate excitement about Korea being featured in many foreign films, but the country appears far less often in foreign films, especially Hollywood films, than do other Asian countries like China and Thailand. “Mission: Impossible III,” starring Tom Cruise, was partly shot in Shanghai, and “The Beach” (2000), featuring Leonardo DiCaprio, was filmed in Thailand.

“Many of the foreign films shot in Korea are not purely foreign because they are often joint productions or are made by ethnic Koreans,” said Alex Seo, an international affairs manager of the Seoul Film Commission’s planning and promotion division.

Films in which Korea figures into the storyline are shot here as well, Seo said.

One of the reasons there are fewer foreign films shot in Korea is that Korea does not have famous landmarks like China, Japan or Hong Kong, according to Seo.

Seo also said that there is little precedent for foreign films shot in Korea, which makes filmmakers and their investors hesitant about using this country as their primary location for production.

Christine Yoo, the Korean-American director of “Wedding Palace,” said the quality of the film crews who are willing to work with foreigners, value for money, tax incentives and good locations are all crucial elements filmmakers consider when deciding on a location for production.

“The Korean production system is very different from the U.S. system so it took time for me to understand the functions of each department,” Yoo said. “Job descriptions are different, too.”

There is another problem. Korea does not offer tax rebates to filmmakers as countries like the United States, Britain, Germany, Australia and New Zealand do. The subsidy provided by the Seoul and Busan film commissions is a very small amount, and a tax rebate would be a much greater incentive, especially for big budget films.

But the Korean film industry may soon be getting a break. According to the Seoul Film Commission, two films developed by Korean-American film producer Roy Lee are expected to be shot here. The projects include the romantic comedy “Korean Wedding” and a yet unnamed big-budget Hollywood action film starring Channing Tatum, the star of “G.I. Joe: The Rise of Cobra.” Lee is credited with remaking “The Grudge” and “The Ring” series, both of which are remakes of Japanese horror films.

“We hope this will be the first of many big-budget Hollywood films to shoot here,” Seo said.