‘B’ is for the best book on beer, ever

‘B’ is for the best book on beer, ever 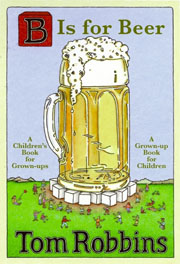 B is for Beer

I think that I shall never hear/

Of drink so lovely as cool beer

With apologies to Joyce Kilmer, until reading “B Is for Beer,” I had never been inspired to write poetry about any particular beverage.

But while soaking up American humorist Tom Robbins’ ode to brewskis, I was reminded of all the reasons to celebrate beer and appreciate the responsibility that comes with its consumption. After all, like anything worth caring about, it’s not something to be handled in a cavalier manner.

B Is for Beer is a parable about just that. Its protagonist - besides the eponymous suds, of course - is 5-year-old Gracie Perkel. One day, while her father and her Uncle Moe are watching a football game, Gracie becomes curious about the drink they’re enjoying that “looks like pee-pee.” While her father demurs to explain, good ole Uncle Moe enlightens her with gusto: “[Beer is] an elixir so gassy with blue-collar cheer, so regal with glints of gold, so titillating with potential mischief, so triumphantly refreshing, that it seizes the soul and thrusts it toward that ethereal plateau where ... all human whimsies float and merge.”

Glug glug glug, ahhhh. Uncle Moe is right, isn’t he? The book is filled with pitch-perfect descriptions like this. And a bonus: The slim tome, which advertises itself as “A Children’s Book for Grown-ups” and “A Grown-up Book for Children,” on its cover, is a simple read that you can finish in one sitting, while having a beer ... or four.

And trust me, when you’ve had a few, such full-flavored descriptions go down smoothly. You’ll get downright giddy at a suggestion from the Beer Fairy that yeast - the “transformative agent,” without which beer would not be beer - comes from outer space. Beer is not of this world! Nectar of the gods, indeed.

Wait, beer fairies? I’m afraid I’m getting ahead of myself. Gracie, on her sixth birthday, decides she’s ready to try some beer herself. But after she chugs one down, she starts to feel not-so-great, which many beer enthusiasts can identify with.

That’s when she meets the Beer Fairy, who takes our heroine on a journey of discovery through - where else? - a brewery.

The Beer Fairy reveals not just how beer is made, but what it creates: a magical transcendence that can lead to understanding, courage and freedom. But of course, depending on the person, there can be some bitter side effects.

At times Robbins’ prose can be as piquant as a good pale ale, and it’s unquestionably appropriate for both children and grown-ups.

Despite some poor decisions by Gracie that would horrify any parent, the consequences of her drinking are shown in full, which ought to help alleviate any concern one might have explaining to children the pleasures of drinking beer.

B Is for Beer is more than a love letter to that fabulous concoction; it turns out to be more of a gentle reminder about the best ways to get the most enjoyment out of life while remaining true to those around you. While clearly the author would say (and this writer would agree) that beer is a valuable part of that, as the wise Beer Fairy says to Gracie, these are matters best left to the heart, rather than a few cold ones.

B is for Beer