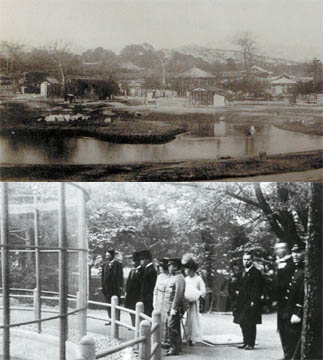 Top: A shot of the zoo at Changgyeong Palace, presumed to have been taken shortly after the attraction opened. Provided by Myongji University-LG Yeonam Library Above: Crown Prince Yeongchin (1897-1970) visits the zoo in Changgyeong on April 26, 1922, with his Japanese wife Lee Bang-ja. [JoongAng Ilbo]

Most people in their 20s or younger would say palace without hesitation. But their fathers and mothers might dwell on the question a bit before offering up an answer.

The reason for the confusion revolves around a well-known and lamentable tale among Koreans: During Japanese colonization (1910-1945), foreign rulers transformed the Korean palace in Jongno, Seoul, into an entertainment area with a zoo and other attractions. They eventually began calling it a garden instead of a palace, demoting the site’s status.

After the colonization period, Koreans used it as a park until the 1980s, which is why some locals still waver between calling it Changgyeong Palace and Changgyeong Garden.

“It was crowded with people having picnics with gimbap (Korean rice rolls), kids with cotton candy and balloons, and ladies with umbrellas taking pictures,” culture columnist Lee Sang-guk recollected.

Korean palaces are divided into two categories: official and secondary. Changgyeong was the latter but still saw its share of history.

King Seongjong (1457-1494) of the Joseon Dynasty (1392-1910) ordered the construction of the palace for his wife and mother, and it was completed in 1483. He had it built facing east, unlike other palaces of the time that face north. Historians say that the odd arrangement might have something to do with the terrain and the fact that it was a secondary palace.

About a century later, however, Changgyeong Palace was destroyed during the Imjin War (1592-1598) along with other palaces, houses and buildings.

The palace was rebuilt in 1616 and quickly developed a newfound status in Seoul. By then, Changdeok Palace had become the official residence of Joseon rulers. Because of its location adjacent to Changdeok, Changgyeong became a backdrop to important state affairs and historic incidents.

Secondly, some of the most dramatic - thus famous - deaths of the time occurred at Changgyeong.

Jang Hi-bin, one of Korean history’s most notorious femme fatales and King Sukjong’s beloved concubine, resided in the palace, where she performed shamanistic rituals cursing the queen. Once Sukjong discovered what she was doing, he ordered that she be executed. In 1701, Jang died on the palace grounds.

Additionally, King Yeongjo (1694-1776) killed his son Jangjo (1735-1762) at the palace, erroneously believing that the crown prince was devising plans to topple his authority. Yeongjo locked his son in a wooden rice chest, where he died eight days later.

But perhaps the biggest tragedy occurred in 1909, when the Japanese decided to demolish parts of the palace compound to build a zoo, a botanical garden, a museum and other entertainment venues. Later in the century, rides were added, and the site became an amusement park.

Many Koreans believe that the Japanese were the first to call the palace a garden, but it was actually Sunjong (1874-1926), Joseon’s last king, that gave it the new name.

“From now on, we will call the museum, the zoo and the botanical garden Changgyeong Garden. That’s because they are all in Changgyeong Palace,” proclaimed Sunjong, according to an April 26, 1911 article in Annals of Joseon Dynasty.

In 1922, the Japanese also planted thousands of cherry blossom trees to better enjoy their national flower, and they later held festivals on the site. It became a popular gathering place: 150,000 people visited Changgyeong in just one week in April 1924, records show. Seoul’s population was about 360,000 back then.

According to Hwang Gi-won, an environment professor at Seoul National University, Changgyeong is a classic example of how the Japanese transformed Korea’s picnic culture.

The professor argues that before Japanese colonization, Koreans enjoyed outings in natural settings like mountains. After, however, they went on picnics in confined, artificial places like parks.

Despite its transformation, the palace site continued to etch its place in history. In 1924, for example, a group of Koreans launched the country’s first figure skating team, which practiced on the frozen ponds in Changgyeong.

It wasn’t until 1983 that the country began efforts to restore the site to its past as a palace. Officials left the greenhouse - the first Western-style one in Korea and an important example of early 20th century architecture - in tact, and in 2004 the government designated it Registered Cultural Heritage No. 83.

Foreign accounts offer peek into lives of those on the inside

The palaces weren’t places where just anybody could swing by and have a look around. Thus, descriptions of life inside - especially the everyday, mundane scenes - are intriguing.

As foreigners with medical, diplomatic and literary skills arrived in Korea, some were given the honor of visiting the palaces. Their accounts, seen from foreign perspectives, offer an interesting peek into the lives of people who resided and worked in the palaces aside from the royal families - the noblemen, guards, dancers, eunuchs and palace ladies, to name a few. 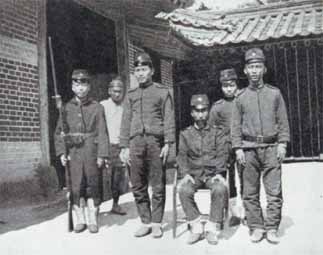 In her 1904 book “Fifteen Years Among the Top-knots,” American missionary Lillias H. Underwood (1851-1921) describes the clothing styles of the upper class.

“Korean noblemen when in attendance at the palace wear a dark blue coat, with a belt which is far too large and forms a sort of hoop in front,” she wrote. “An embroidered breastplate is worn over the chest, representing a stork for civil office and a tiger for military rank. The head-dress is a kind of hat woven of horsehair, with wings at either side, curved forward [...] in order to catch every word uttered by royalty.”

English writer and historian Isabella Lucy Bird (1831-1904) describes a palace scene in her book “Korea and Her Neighbours.”

“At each of the interior gates there were Korean sentries lounging, who pulled themselves together as we approached. [...] We were received by the Court interpreter, a number of eunuchs, two of the Queen’s ladies-in-waiting, and her nurse, who was at the head of the Palace ladies - a very privileged person, middle-aged, with decidedly fine features,” she wrote. 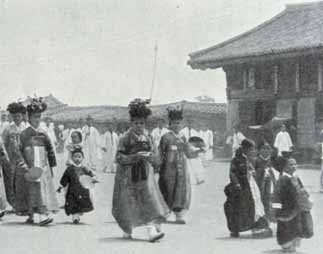 Palace entertainers seen on the streets

Horace Newton Allen (1858-1932), an American diplomat and medical missionary, wrote about the cultural aspect of life inside in his book “Things Korean.”

“The best performances are given at the palace before the royal family and the assembled officials,” he wrote. “These consist of dances by the class of public dancing girls, or gesang, together with some male country dances with songs. The people do not dance for themselves, but sit and look on while it is done for them.”