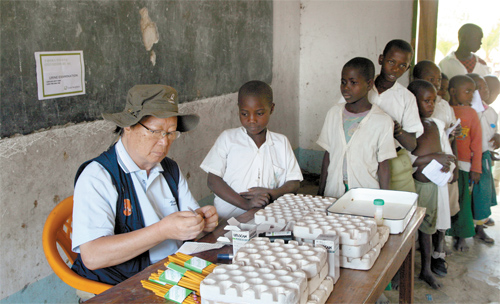 When Kim Bo-kyung traveled to the Turkana region of Kenya two years ago, she met Samuel Kiminsa. At the time, Kiminsa was serving as a Kenyan member of parliament. But he did not always have such a stable job.

Kiminsa used to be one of Kenya’s millions of poverty-stricken children. But his life was turned around when World Vision USA, a faith-based NGO aid organization, selected him to be one of their sponsor children. World Vision has branches in 47 countries including one in Korea.

“The most important thing they gave him was tuition to enter university in Kenya.” said Kim. “Without that, he couldn’t have been a member of parliament.”

Just as World Vision USA helped Kiminsa, World Vision Korea has the means to provide the same opportunities to young children today. Kim traveled in Kenya to document World Vision’s work in the East African country and bring back news of this work to Korea to raise awareness. In Kenya, the money raised to sponsor the children is going toward providing food, clean water, educational facilities and fighting disease.

These missions are key to creating publicity and getting funds for international aid work, subjects which are often hard to sell to the Korean people and government, two important sources of funding for any NGO.

Korea used to be a recipient of World Vision aid during its post-war period. In 1991, World Vision Korea began helping other countries, a turnaround that doesn’t happen very often, according to Kim.

“The point isn’t feeling a sense of debt to other countries [for their past aid to us],” said Kim, “but that Korea has many things right now and we have to do something for the poor children in the world. We have to go with people hand in hand.”

Out of Korea’s gross domestic product, which currently stands at nearly $950 billion, only 0.09 percent of that figure goes toward official development assistance - a figure that is much lower than the UN recommendation of 0.7 percent.

“Korea is a very new donor country,” said Kim Hoon-min, director of the development policy division at the Ministry of Foreign Affairs and Trade. “We think that at this stage it is too much for Korea to be compared with other nation donors.”

As the number of NGOs increases, competition for funds gets tighter as each group is dipping into the same government pool of money. Applying for aid from the Korean International Cooperation Agency, the government agency responsible for distributing official development aid money to NGOs, can often be competitive, says Choi Mi-na, program manager at Good Neighbors, a Seoul-based NGO working to bring aid domestically and internationally in 27 different countries.

In 2008, NGOs received $6.47 million from the government for 77 projects, which is .02 percent of the total amount of aid given by Koica. Many NGOs feel that this number is simply not high enough and that the problem is not only how Koica distributes money, but that Koica does not have enough funds.

Winning over more funds from the government may be harder than it seems, especially if Korean people are not behind financing NGOs. However, most leaders in the international aid arena believe that the more the public becomes aware of international problems, the more they will support the NGOs’ projects.

“When I first joined Good Neighbors several years ago, there wasn’t much recognition of NGOs,” Choi said “But over time - especially with more media coverage of countries in need - the public has begun to feel a kind of global responsibility to help overseas.”

World Vision’s Kim Bo-kyung agrees that exposure to other countries will help get Korean people on board. “Up until five years ago, even in Seoul we didn’t see very many foreign people,” said Kim. “But now things are different. We realize that we are all connected - environmentally, economically, in every aspect of our lives.” 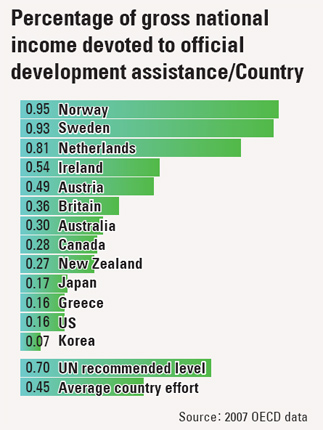 Kim cites the 2004 Christmas Eve tsunami in Southeast Asia as a turning point.

“They saw the disaster site and how many people’s lives were destroyed,” said Kim, “and they thought, ‘Right now, I am very safe, but they are in danger, they have lost everything.’”

Kim said many people contacted World Vision following the tsunami asking how they could help. Because World Vision usually allows only experienced staff members to be directly involved with projects, the best form of aid is financial.

NGOs rely on these donations from individuals and corporations to keep projects alive. Their budgets have grown exponentially since their establishment merely a decade ago - expanding to nearly 10 times their original size, mostly thanks to the altruism of religious institutions and individual donors. But NGOs can always use more donations, and many are increasingly looking to the government to help boost finances.

Meanwhile, the government is taking steps to make foreign aid a bigger priority. By 2012, the government plans to expand official aid to 0.15 percent and by 2015, to 0.25 percent, amounting to around $3.3 billion. But this still places Korea below the 0.45 percent average for other developed nations, and NGOs feel the government can do more, faster.

NGOs are banding together to push the government with an increasingly loud voice. The Korea NGO Council for Overseas Cooperation is an organization that attempts to link NGOs together and foster communication. Since its start in 1999, the council has doubled its number of NGOs to 63 members.

The council has a unique position facilitating between the NGOs and working with the government.

“We call it a strategic partnership,” says Lee Kyung-shin, a manager at the council, about the organization’s relationship with the government. “We are like a channel for other NGOs.”

The council has proposed policies to the government to change laws related to aid, according to Lee, as well as help organize several campaigns to raise awareness on the issue. For example, in 2005, the council worked with the Global Call to Action Against Poverty, an international aid group, to coordinate Korea’s first White Band Day, a day intended to inform the public of the need for providing aid to other countries. White Band Day is held on June 25, to coincide with the starting date of the Korean War, in the aftermath of which Korea received large amounts of foreign aid.

“NGOs are very new to donors.” said Lee, “The oldest NGOs in Korea have only been around maybe 20 or 30 years, so they aren’t very well known to the government or society.”

The battle to fight global poverty and disease is a many-pronged war, requiring collaboration amongst NGOs, the government and the public. But despite progress made, Korea still has a long way to go.

“Even though NGOs will continue to petition for more funds and the government says it plans to raise Korea’s response, in the end, reaching that goal can’t be a result of NGOs’ demands,” said Good Neighbors’ Choi. “Change will come when the strongest efforts are pushed from within the government.” 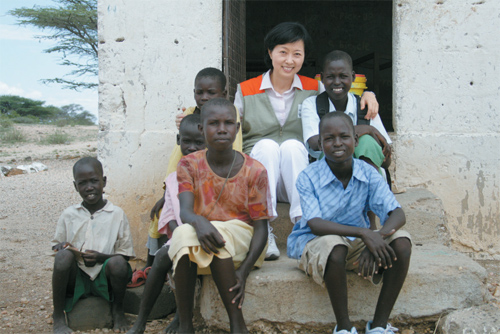 Kim Bo-kyung sits with children on her visit to the Turkana region of Kenya. Provided by World Vision

Rim Han-jong has traveled the globe. But his trips are not always light-hearted pleasure cruises. Instead, Rim - an expert in the field of treating neglected tropical diseases - travels to administer aid.

He began traveling to treat these kinds of diseases after Korea was declared a nation free of parasitic diseases. These conditions are treatable maladies that only become deadly in areas of poverty where the infected have no means of receiving medical aid. When a lack of funds forced him out of private practice, he joined forces to treat diseases with Good Neighbors, a Seoul-based NGO working to bring aid domestically and internationally in 27 countries.

Good Neighbors, after winning a governmental bid in 2008 to organize a medical health program in Tanzania, began using resources to train local doctors and send experts from Korea. That’s where Rim enters. He takes about two trips per year to Tanzania, each for around a month. But in poverty-stricken regions, even these trips can be too little, too late.

Take Benjamin, a 42-year-old Tanzanian who tried to seek treatment at a local hospital. Because he could not afford proper treatment, he was given basic medication and returned home only to have his condition worsen. He received a full diagnosis upon the arrival of Rim and his team at the end of July and began receiving proper treatment. But without early treatment, the team was unable to reverse the man’s condition. He eventually passed away.

The Korean government helped to fund 70 percent of the Tanzania project, amounting to nearly 1.9 billion won ($1.5 million). Other funding sources are individual and corporate donations, as well as active fund-raising, which allow the fight against tropical diseases to continue in Tanzania and beyond.

*Jackie Lho contributed to this article.