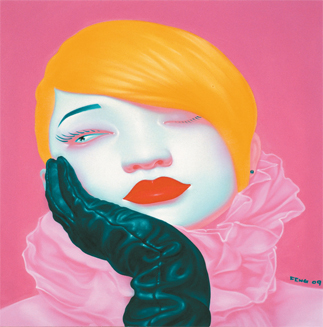 The faces are markedly white, in strong contrast with their striking red lips and vibrant hair. The use of primary colors may seem a bit odd at first sight, but they were carefully selected and employed.

These portrait paintings are now on display at the Die Galerie Seoul in Cheongdam-dong, which is located in the southern part of the city.

Of the handful of European galleries in town, two of them - the Die Galerie and the Opera Gallery - are featuring new exhibitions that end soon.

The Die Galerie, which is a branch of the German gallery with the same name, is displaying an exhibition titled “Floral Life,” featuring 15 of Feng’s works, including two sculptures. This marks the artist’s first solo exhibition in Korea.

Feng is one of the most highly sought-after Chinese painters in the world. He became famous for his pop art while in his mid-30s, a relatively young age to achieve such acclaim. Born in 1968, he has produced a number of different series ranging from “Idol Fans” and “Roman Trip” to “Coolness” and “Butterfly in Love.”

It has been only a few decades since American and European contemporary art was introduced in China after the country’s Cultural Revolution ended in the late 1970s. The style picked up steam in the 1990s, when a group of young artists including Feng started distinguishing themselves by expressing sarcasm about China in their works.

In Feng’s portraits, he uses unique characters to express his criticism of the country.

“Feng reinterpreted the Western pop art that represents commercialism and capitalism and portrayed the radical changes in China through exaggerated facial expressions of the women,” said Oh Se-kwon, an art critic and art professor at Daejin University.

All the women in the paintings, for instance, avert their eyes.

Regarding his general use of women in paintings, Feng said, “I thought that women’s characteristics such as hairstyle and makeup could communicate societal changes better.”

Feng also introduced a new series of paintings. At first glance, the works seems to center on scenes full of flowers. But upon closer examination, you’ll see large skulls overlapping the images. 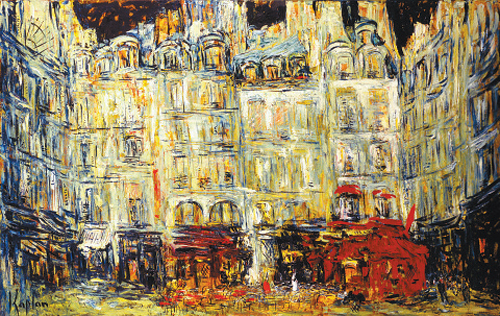 “After my parents died, I wanted to express my emotion about life and death via these paintings,” he said.

Also in Cheongdam-dong, the Opera Gallery, a branch of the Paris art venue, is exhibiting the works of Armand Fernandez - a.k.a. Arman - and Mark Kaplan. Arman (1928-2005) is one of the founders of the Nouveau Realism movement, along with Yves Klein. Nouveau Realism was a major art movement in Europe equivalent to the pop art one in America in the 1960s.

Arman was influenced by his father, who was an antiques dealer and cellist. Among the pieces on display at the gallery is a series of musical instruments that he took apart and then reassembled in artistic ways.

Numerous works of Mark Kaplan are also on display in the exhibition.

Born in St. Petersburg, Russia in 1957, he worked in film production and stage directing before fully immersing himself in paintings. Kaplan moved to Saint-Tropez in southern France, where he still resides, to focus full time on art. His works feature settings from everyday life, such as a cafe in the afternoon.

Kaplan said he was influenced by Rembrandt and van Gogh, and his paintings are characterized by unrestrained flair, warm and bright colors and solid compositions. He omits details and delivers beauty through the use of intense colors and the balance between compositional and figural elements, creating what are described as neo-impressionist paintings. 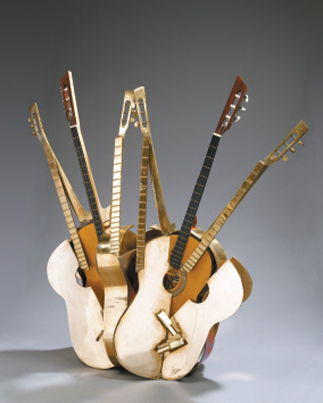