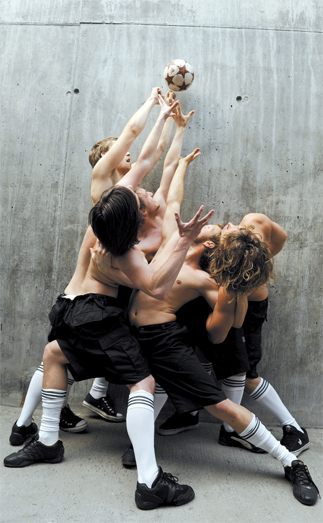 It’s a buffet of the world’s performing arts, prepared especially for Koreans.

The Seoul Performing Arts Festival, or SPAF, has been bringing the hottest plays, dance troupes, concerts and other performances from countries around the world to Korea every fall since 2001. This year is no different in that respect, as the festival will feature more than 40 performances from 12 countries. The twist this year is that the event will place an emphasis on the digital element of performing arts, under the theme “Analog and Digilog.” Organizers say this is in line with the trend in the global performing arts scene, which is increasingly seeking marriages with other fields, especially digital technology.

One good example in SPAF’s lineup is “Norman,” by the oddly named Montreal-based dance company Lemieux.pilon 4d art. The performance is a tribute to Norman McLaren (1914-1897), a Scottish-born Canadian animator and film director. It features one dancer and innovative projection technologies.

“The Age I’m In” by the Sydney-based, award-winning company Force Majeure also presents digital imageries alongside dances, mimes and even lip-synching in an effort to portray the daily lives of modern men.

“Yesterday,” by Britain’s Jasmin Vardimon Company, is a retrospective piece featuring some of the most breathtaking choreography of Jasmin Vardimon, the Israeli-born figure known for her experimental and innovative performances.

There are also some works that strive to merge foreign and Korean elements of the performing arts, allowing audiences to rediscover international classics as well as local traditional theater. “Romeo and Juliet” by the National Changgeuk Company of Korea is presenting the timeless love story in changgeuk form, said Choi Yoo-mee, one of the event’s organizers. Changgeuk is a century-old form of traditional Korean opera. The event will also feature “Hamlet” by Korea’s Yohangza Theatre Company, which has recreated the Shakespeare classic by mixing in traditional Korean shamanism and drama elements. Additionally, Poland will take center stage at some events to celebrate the 20th anniversary of diplomatic ties between itself and Korea.

If you are not well versed in the performing arts scene and find some of these works too profound, organizers suggest that you check out “A Dance Tribute to the Art of Football.” With this production, the Norwegian company Jo Stromgren Kompani hopes to break the boundary between dance and sports.