[Viewpoint] A lifelong search for a childhood hero

[Viewpoint] A lifelong search for a childhood hero 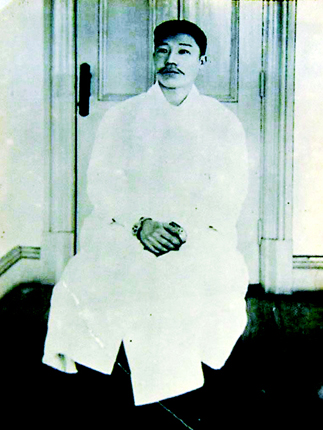 The patriot An Jung-geun sits for a photo just before his execution at Lushun Prison. [YONHAP]

Former National Assemblyman Kim Yeong-gwang is 78 years old. Recently, he experienced a health crisis, and his friends and family members were worried about his condition. He has recovered considerably, but is still not as healthy as he used to be.

Yet he flew to Lushun, China, yeserday. He has visited Lushun and Dalian a total of 10 times. He must have been destined to go there.

The reason? He heard the call of independence fighter An Jung-geun from his unknown grave somewhere on the continent. On Oct. 26, 1909, the nationalist An shot Ito Hirobumi, then resident-general of Korea, and was executed at the Lushun Prison on March 26, 1910.

The prison authority buried him in a nearby cemetery. The patriot An’s last wish was to be buried in his homeland when Korea was liberated.

Korea gained its independence, but his wish has not been fulfilled.

Last year, the Korean government conducted an excavation there for the first time. The body was not found, but Kim Young-kwang was not disappointed. The excavation crew searched the site behind the prison, but that was not where he thought An Jung-geun was buried.

Kim is convinced that if he knocks on the door over and over again, heaven will open up and show him where the patriot is really buried.

Kim’s devotion to An Jung-geun started 62 years ago in 1947 when, as a student at Suwon Agricultural Vocational High School, he was assigned the role of the patriot in a school play.

He wore a blanket as a cape and used a wooden prop gun. The play was far from elaborate, but it carved the name of the revolutionary deeply in the mind of the 16-year-old boy.

When Kim became a lawmaker in his 50s, he committed himself to finding the body. He flew to the United States and met with Dr. An Ung-ho, the grandson of An Jung-geun.

After a lot of persuasion, Kim convinced An to give him a letter of attorney to find the body and bring it back to Korea. Next, he interviewed those who might know the exact location of the grave.

He finally met someone who had visited the grave a number of times before Korea was liberated. According to his memory, An was buried not behind the prison but on a hill a half kilometer away from it. This source said An was among dozens of executed political prisoners, and the last letter of his name, “geun,” was erased on his tombstone. The man who had been to the grave has now passed away.

And yet, despite finding this information, Kim could not go to Lushun personally.

In the 1980s, Korea did not have diplomatic relations with the People’s Republic of China. So he looked for people whom he could convince to travel to Lushun legally - Korean-Americans and Korean-Chinese - to look for the body, but with little success.

After four years of hard work, Kim finally got a Chinese visa in 1987. He arrived to find that the Lushun Prison site a was restricted military area, but he felt he had to go inside. He was arrested by the Chinese security police and was released after paying a fine.

Even then, he did not give up and went in again. He visited the cell patriot An was detained in as well as the execution site.

He sought out the grave with a map drawn by the man who’d been there. But he has not yet found the right one. The nameless tombs might have vanished in the six decades since the prison closed.

But Kim Yeong-gwang has never let up. He visited Lushun over and over during the last 20 years, and he is leaving again tomorrow.

In the film “The Bucket List,” Jack Nicholson and Morgan Freeman try to accomplish as much as possible before their deaths. The film’s title refers to the list of things you want to do before you “kick the bucket.” Finding An Jung-geun’s body is on Kim Yeong-gwang’s bucket list.

The wind and rain must have worn down the grave over time. But we all wish for a miracle. We hope Kim Yeong-gwang will find patriot An Jung-geun’s grave.

It would be an inspiration if Kim turned out to be the first Korean An Jung-geun meets when his body is finally found.

Kim may even overcome his health problems because of this incomplete item on his bucket list.

As I watch Kim leaving for Lushun, I cannot help but ask myself what’s on my bucket list.

*Time has surely worn down the patriot An Jung-geun’s grave. But it can’t erode Kim Yeong-gwang’s resolve.