A stroll through time in Old Incheon

A stroll through time in Old Incheon 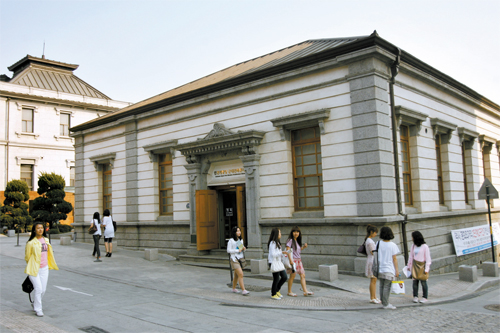 Incheon is home to a number of early 19th-century structures such as Japan 58th Bank. A private home owned by a Chinese resident features Chinese-style architecture. Provided by Incheon Metropolitan City

The Jung District in Incheon may not have the hustle and bustle of bigger metropolises like New York or Seoul nor the glamour of historic cities like Paris or Rome, but it does have other charms. For fans of turn-of-the-century architecture and students of modern Korean history, the nondescript neighborhood provides one of the best glimpses of a Korea in transition from hermit kingdom to global participant.

A picture of Japan 18th Bank. A view of Hongyemun Tunnel. By Jeon Min-kyu

More than a century has passed since Korea first opened its doors to the international community in 1883 through Incheon port, and remnants of that collision of foreign cultures still remain. But they are not always well-preserved or easy to find. In the city of Incheon, they lie scattered - even hidden - among the dull, gray and featureless buildings. It’s easy to just pass them by and it really requires a keen, interested eye to know where they are and what stories they have to tell.

In an effort to share these sites with the public, the Jung District Office began offering its “History Walk through the Port’s Opening” in 2004. According to officials there, greater awareness about and interest in cultural sites and their history in Korea has resulted in an increase in the number of participants on the walk in recent months.

“We don’t have the exact number, but we get hundreds of participants a day, with more on the weekends,” said Bin Nam-ok, one of the chief tour guides at the district office. “It’s definitely one of our most popular tour programs.”

The tour begins at the Korean-Chinese Cultural Center. A stone staircase that once functioned as the boundary dividing the Chinese settlement to the left and the Japanese settlement to the right leads up the hill. The stone ornaments decorating the path on either side were made according to the style popular in each nation at the time. The ones on the left are in the Chinese style, and those on the right feature Japanese aesthetics. The staircase, rebuilt in recent years, is designated City Monument No. 51.

Going up the staircase and up Mount Eungbong, Jayu Park comes into view. It was built in 1888 and was the first Western-style park in Korea. It functioned as a buffer zone for all foreign settlements and was given the name Gakguk (each country) Park or Manguk (all countries) Park.

“While the structures have been replaced over the years, the general framework of the park has retained its original shape,” said Park Hye-jeong, the tour guide who gave this reporter the tour. 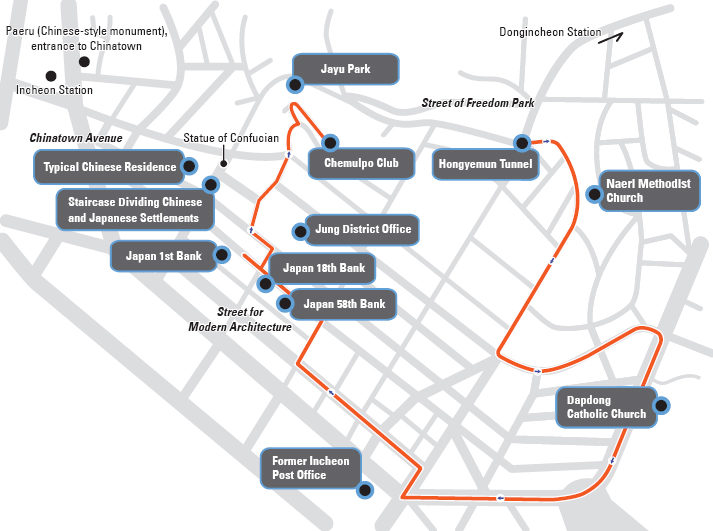 The structures have changed indeed. The villa of James Johnstone, an English trader, once sat atop the mountain within the boundaries of the park, but burned down during the Korean War (1950-53). Today the only thing that remains is a monument commemorating Korea-U.S. relations. A statue of General Douglas MacArthur, who led the Battle of Incheon, was erected in the park in 1957. Since then, the park has been called Jayu (freedom) Park.

Another notable stop on the walk is the Chemulpo Club, a popular watering hole among expats in the early 1900s. The club was set up in August 1891 by diplomats and merchants from 11 countries. Today it is a history museum that holds exhibitions and cultural events highlighting the nations that were closely connected to the club in its heyday, and it is the city’s Tangible Cultural Asset No. 7.

Coming down Mount Eungbong, a tunnel covered with ivy is a striking part of the landscape. The tunnel, named Hongyemun, was built in 1908 by the Japanese, who had expanded their settlements to both sides of the mountain and needed a tunnel to connect them.

“Boring through the mountain and building a tunnel this big must have been such an unprecedented task at the time,” said Park. “Records show that there were many accidents, injuries and deaths during the construction.”

Heading back to where the walk began is the last storied area, which is dotted with structures built and used by early Japanese settlers. These include a building used by the Jung District Office. The building was constructed in 1883 for use as the Japanese consulate and is now registered as Cultural Property No. 249. 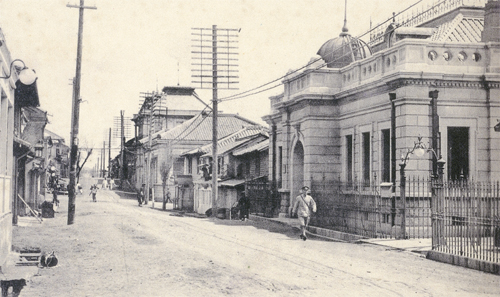 A picture of “Bank Street,” which is presumed to have been taken in the early 1900s. Provided by Incheon Metropolitan City

According to an inspection conducted by ArchiPlan, a Korean architectural firm, in 2003, there are about 250 buildings in Incheon that were built before Korea gained independence from Japan in 1945. About six of them are from Japan’s annexation of Korea in 1910.

This is amazing considering that when Japan invaded Korea it destroyed many of Korea’s ancient buildings, and that when the Korean War (1950-1953) broke out not many structures survived. To top it all, Korea’s massive drive for industrialization and modernization in the 1970s further demolished much of the historic architecture in the nation. 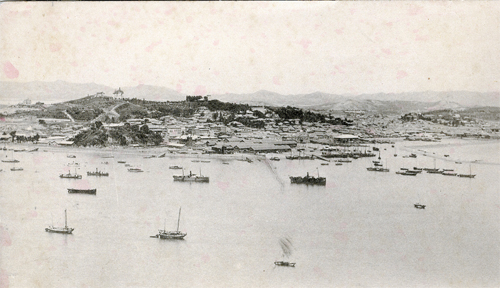 A view of Incheon Port between the late 19th and early 20th centuries. Provided by Incheon Metropolitan City

The Jung District Office plans to initiate an academic investigation into the area with the aim of proposing to the central government that the area be designated a modern historical and cultural zone related to the port’s opening. It hopes that the designation will be made within the year.

Officials are worried that many of the buildings in the district are poorly preserved and that the recent economic recession has taken a toll on the commercial activity in the area, further endangering the historic structures and sites.

Once the 470,000 square meter area is designated as a special zone, the office plans to restore and preserve the remaining buildings and offer tax benefits to companies operating businesses that enhance the historic atmosphere of the area.