Isn’t that the train station from ‘My Sassy Girl’?

Isn’t that the train station from ‘My Sassy Girl’? 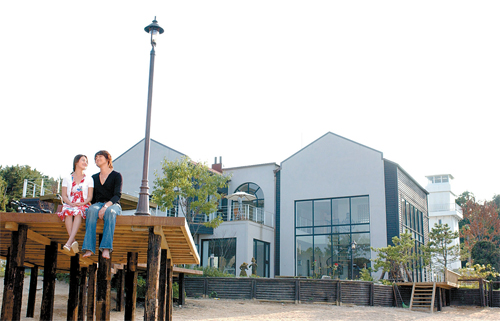 Moviegoers and drama lovers flipping through photos of Incheon and may think certain places seem vaguely familiar. With beaches, islands, an amusement park, Chinatown and Korea’s largest airport, it’s no wonder this metropolitan city has established itself as a filming location for movies such as the recent Cannes favorite, “Thirst.”

“There seem to be all kinds of interesting sites in Incheon,” says Yook Sang-hyo, director of the 2004 film “Dalmaya Seoul Gaja.” “The beautiful roads by the seaside and the busy ports make it possible for the city to be a great background for any kind of movie.”

He’s not kidding. According to the Incheon Film Commission, a total of 27 movies and dramas were filmed in various locations around Incheon in 2008. Thirst, for instance, found the perfect spot last year in a factory near Incheon International Airport.

But fans may also remember the locations of some popular hits from a while back.

One of the most famous on-screen sites in the Incheon area is “Full House,” named after the eponymous 2004 KBS-TV drama featuring singer Rain and actress Song Hye-kyo. The beautifully constructed set near Sugi Beach on Si Island, Ongjin County, attracted many visitors even after the drama ended.

SBS-TV’s “Stairway to Heaven,” which starred Kwon Sang-woo and Choi Ji-woo, also featured a gorgeous house by the seaside on Muui Island in Incheon. It is a well-known tourist site, with shellfish covering the seashore.

Muui Island was also the backdrop for the 2003 hit film “Silmido” directed by Kang Woo-suk. The movie, set in the 1960s and 1970s, is based on the true story of a group of criminals who were brought to an uninhabited island and trained to kill North Korean leader Kim Il Sung.

And remember “My Sassy Girl”? You can’t forget Jeon Ji-hyun, drunk and asleep on a subway station bench, making Cha Tae-hyun give her a piggyback ride to a cheap motel. That was Incheon’s Bupyeong Station. The film also includes scenes shot at Incheon Station.

“What’s attractive about Incheon is there is such variety to this city,” comments Yi Hyun-shik, an administrator at the Incheon Foundation for Arts and Culture.

“We can still see the 1970s in downtown Incheon, while the 1980s, the years of Korea’s transformation, are left in parts of the city here and there. Incheon is a place where you can see the newly changing 21st century.”