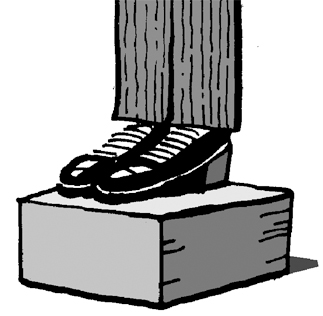 Women have found tall men a better bet than their shorter friends since the Stone Age.

Height was an advantage when the tribe was off hunting, and women thought a shorter fellow was less likely to put food on the table.

Even in the modern age, when hunting is no longer a means of livelihood for most people on earth, the functional relations of one’s height, ability and popularity have not changed.

Tall men are more likely to get promoted ahead of others, more likely to be paid more and thus have a better chance at winning the hand of the woman they desire.

Only 4 percent of American men are over 188 centimeters, but one-third of the CEOs in the U.S. are taller than that.

Another survey shows that height equates with earning potential. For the average man, an increase of 1 inch (2.54 centimeters) means nearly $800 extra per year.

So a 183-centimeter-tall man can earn 6.79 million won ($5,572) more per year than a man who is 165 centimeters tall. Considering that a man works 30 years as a salaried employee on average, the accumulated difference amounts to a lot of money.

It is only natural that small men feel short-changed. There’s a common perception that vertically challenged males adopt a more aggressive posture to make up for their lack of stature. This sense of inferiority is known as the Napoleon complex.

Napoleon Bonaparte, who was around 168 centimeters tall, pursued power across Europe and eventually became emperor of France. Other world leaders with great power at their fingertips were also a little on the short side - Deng Xiaoping and Yasser Arafat, for example. So since lack of height can translate into high levels of motivation, there is no reason for little men to lose courage.

But humans, especially men, often want most what they sorely lack, even if one commands huge armies. Joseph Stalin, 163 centimeters tall, was said to have executed several painters who painted him as he was. Apparently he was satisfied only when Dmitri Nalbandian painted him from a low angle, looking up at the subject.

President Nicolas Sarkozy of France was a target after he selected little people from a factory to stand around him when he was delivering a speech. It is a pity he used to wear high-heeled shoes and even stood on tiptoe during photo sessions. He doesn’t seem to find comfort in the fact that he is taller than North Korean leader Kim Jong-il and President Dmitri Medvedev of Russia, two rivals in the shortest world leader contest.

The writer is an editorial writer of the Joong-Ang Ilbo.