Another stab at big-screen success

Another stab at big-screen success 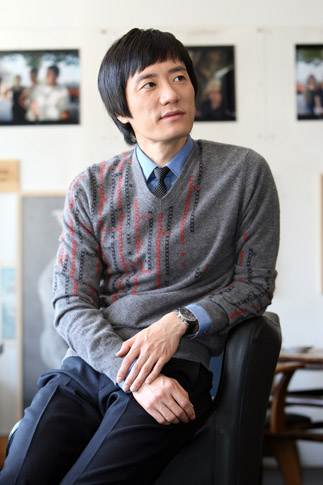 Actor Kim Myung-min is returning to the big screen. And this time he hopes to make a larger splash than his last effort, the 2008 crime film “Open City,” which had an average showing at the box office.

Kim actually made a name for himself - and gained legions of fans - for his recent work as a coldhearted doctor in the TV series “The Great White Tower” and as an aggressive conductor in the program “Beethoven Virus.”

Now, he is again looking to gain a foothold in the movie world, taking on an extremely challenging role as Jong-woo - a Lou Gehrig’s patient - in the upcoming film “Closer to Heaven.” The movie, which hits theaters Sept. 24, depicts a tragic love story between Kim’s character, Jong-woo, and his wife, Ji-soo - played by actress Ha Ji-won, the heroine of the summer blockbuster “Haeundae.” The director is none other than Park Jin-pyo. who was behind the 2005 hit movie “You Are My Sunshine,” which starred actress Jeon Do-yeon as an AIDS patient.

The 37-year-old Kim is well known for his rigorous self-discipline and his ability to adapt to different roles. His latest film is no exception: Kim actually lost a whopping 20 kilograms (44 pounds), reaching a skeletal 52 kilograms, which is extremely thin for someone who’s only 180 centimeters tall (5-foot-9). 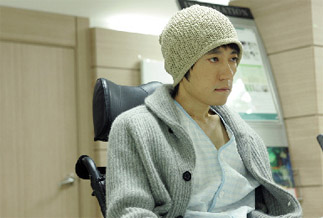 Kim Myung-min plays a Lou Gehrig’s patient in the upcoming film “Closer to Heaven.” He actually shed 20 kilograms (44 pounds) for the role. Provided by Zip Cinema

“I’ve gained back about 10 kilograms in three months since filming ended,” Kim revealed in a recent interview with the JoongAng Ilbo. “However, I’m not in shape yet, and I’m still confused about whether I’m Kim Myung-min or Jong-woo.”

A Lou Gehrig’s patient has never been featured in Korean films before, in part because it’s hard for actors to portray the struggle against the disease. Kim said the three-month shooting process was indeed a trying experience.

“The hardest part was not that I had to lose weight before the shoot, but that I had to keep losing it through the course of filming because I was playing this guy who is getting sicker day by day,” Kim said. “So it was more like filming a documentary.”

The drastic weight loss required not only following an extremely strict diet, but also getting as little shut-eye as possible, according to Kim.

“I slept no more than two hours every day,” Kim said. “That lack of sleep brought about depression, and that in turn brought about less sleeping and less eating. When there were about 10 days left until the end of shooting, director Kim told me to stop losing weight, saying, ‘You may actually die if you keep going.’”

What troubled the actor more, however, were the side effects of his rapid weight loss.

At times, the actor said, he fell unconscious and occasionally even “failed to recognize people.”

The film producers originally planned to make a dummy for Kim’s role and fix it up with the help of computer generated graphics. But they changed the plan when Kim actually shed about 10 kilograms in 20 days after shooting started.

“I didn’t want to turn to CG technology,” he said. “If I acted as if I was ill when I wasn’t actually sick, audiences wouldn’t be able to feel the pain the character suffers. Acting is an attractive job, but it is painful at the same time.Getting back to my original state has been harder than I expected.”