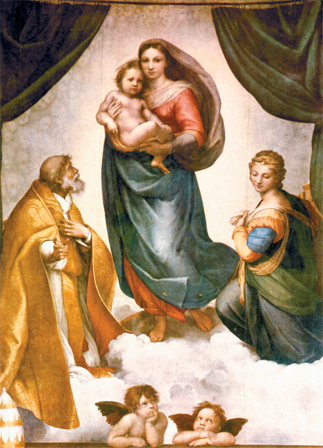 Recently, I discovered an old sticker on a collection of fairy tales from my childhood while arranging my books at home. The sticker, a favorite when I was young, depicts a chubby cherub lost in thought, chin planted firmly in hand. The next day, when I was buying a cup of java at a coffee chain in my office building, it suddenly hit me: The angel in the shop’s logo and the one on my sticker closely resemble two cherubs found in a famous painting.

The angels appear in the bottom of “The Sistine Madonna,” a painting by the Italian High Renaissance master Raphael Sanzio renowned for its unique visual effects. 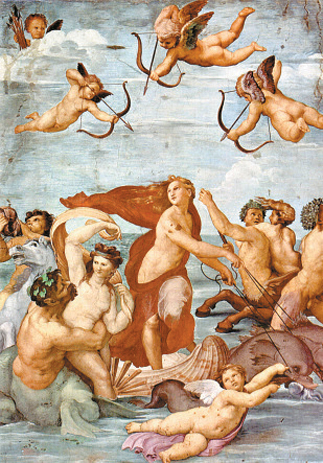 Drawn green curtains frame the left and right sides of the painting. Between them, the Virgin Mary holds an infant Jesus set against a mystic, cloudy background where you can just barely make out the faces of numerous cherubs. The young Virgin Mary, so pure and graceful, seems to be emerging from the clouds, with her skirt and veil fluttering in the breeze.

Accordingly, the painting presents viewers with the image of an ethereal space existing just beyond the curtains of this world, with the Virgin Mary and baby Jesus descending to earth to bless humans.

The overall painting carries a serious tone, but the two well-defined cherubs at the bottom add a cheerful element to the work. The one on the left side looks relatively serious, with his chin resting on his hand. But the one on the right side looks downright bored, a typical expression among children. Perhaps the angel on the right is swinging his legs nonchalantly, though we cannot tell because they are hidden from view. These poses and expressions are realistic and natural - making them all the more lovely.

Many people are familiar with the images of these baby angels through their use on Christmas cards and corporate logos and in elements of pop culture today.

On the same token, many people are also familiar with Raphael, who is featured heavily in art history textbooks as one of the great High Renaissance masters. 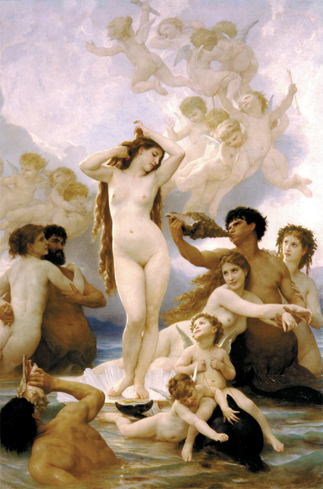 Sadly, though, few people link the two, remaining oblivious to the fact that Raphael created these angels. That’s opposed to, say, an ad campaign that uses an image of the Mona Lisa or the Pieta, which many would immediately associate with Leonardo da Vinci and Michelangelo, respectively.

My guess is that Leonardo’s paintings present a profound and mysterious atmosphere rather than landscapes and scenes from everyday life, while Michelangelo’s pieces are heroic and powerful. Raphael’s works, however, aren’t as striking at first, and his messages are laid out simply, meaning they are quite obvious.

Does that mean that Raphael is less of an artist than these other two greats?

To answer that question, a remark by the art historian Ernst H. J. Gombrich (1909-2001) about Raphael’s works should suffice: “We are apt to conclude that paintings with such a general appeal must surely be a little ‘obvious’. In fact, their apparent simplicity is the fruit of deep thought, careful planning and immense artistic wisdom,” he wrote in his book “The Story of Art.” A quintessential example of this can be found in Raphael’s “Triumph of Galatea.”

Upon first glance, I felt this fresco was simply a lighthearted and pretty painting. But a closer, longer look gave me a new appreciation for it, as I started to see its amazing balance, elaborate symmetries and natural rhythm.

In this painting, the sea nymph Galatea rides across the waves in a chariot led by two dolphins, hearing a love song from the ugly one-eyed giant, Polyphemus.

The sign of the Angel-in-Us coffeehouse on Seosomun street, central Seoul. By Moon So-young

Three cupids aiming their arrows at the heart of the nymph hover in an arch over her head, complementing another one down below beside the chariot. Two sea gods blowing trumpet shells form a variation of symmetry, as do another two pairs of sea gods and goddess. They are not aligned in perfect symmetry, which would make the painting awkward and unrealistic. The variation of symmetry makes the painting look natural, stable and dynamic, all at the same time.

After his death, Raphael became a textbook example for Neoclassicist artists who attached great importance to balance and harmonious compositions and ideal beauty in their paintings.

In particular, the Triumph of Galatea garnered a type of idol status, and artists applied parts of the painting to their works. One of these homages is “The Birth of Venus” by William-Adolphe Bouguereau (1825-1905), a French academic painter in the 19th century.

Could The Birth of Venus prove the Chinese proverb that “Blue comes from indigo but is bluer,” which means that a pupil can excel past his master?

Not in my book. With apologies to Bouguereau, I think his painting actually underscores why Raphael’s works are so special. And it provides an valid answer to the question of who is the real master.

The skin of the characters in Bouguereau’s painting is too white and sleek, and the figures look as if they are wax dolls, at least in my opinion. The poses of Venus and the baby cupid touching a dolphin feel forced.

In contrast, note how naturally and unaffectedly lovely the figures in Raphael’s paintings - especially the two cherubs - are in their poses and expressions!

Such excellent depictions must have come from a thorough observation of objects, astute senses and elaborate techniques and skills.

The fresh-but-not-shallow beauty of Raphael’s paintings easily make him one of the greatest High Renaissance masters.