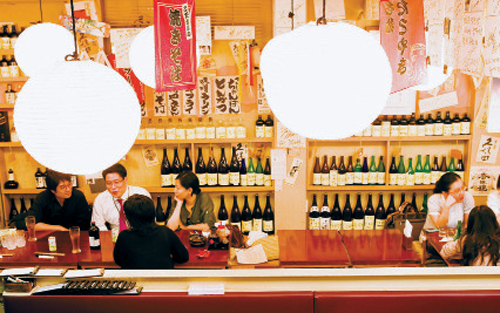 Red lanterns light up the night, beckoning weary workers and stressed-out students to stop for a cup of sake and their favorite accoutrement at izakaya, the Japanese-style pubs that have been cropping up all over the city since they opened here 10 years ago.

These establishments initially catered to a few Japanese expatriates in Korea and foreign tourists. Now, there are izakaya in almost every corner of every district in the city. Smaller izakaya have only five to six tables, while some of the bigger ones are as large as an auditorium.

In Japan, an izakaya is a pub offering something other than the upmarket sushi or kaiseki multi-course meals that have become standard fare for many fans of Japanese cuisine. Instead, they serve small plates of food and sake.

We took a tasting tour around some of Seoul’s izakaya, where we encountered more izakaya devotees and detractors, delectable food and, of course, plenty of sake.

“When I was studying in Japan, I fell in love with sake, but it is hard to find good sake here in Korea,” said Hong Jun-seong, a sake sommelier. “Also, there are not that many foods that go well with sake and Korean foods are too spicy to eat with it. That’s why I go to izakaya.”

However, some patrons, like Kim Beom-su, a well-known blogger known as pat2bach, find the establishments lacking. “There is an increasing number of izakaya in Seoul these days, but many of them are izakaya in name only,” Kim said. He went on to say that the lack of cooks from Japan has diminished the quality of the food at some izakaya and that some places tend to focus more on the decor than the food. Some izakaya, he says, serve reheated frozen food and others have too many Korean items on the menu.

Park Eun-young, a restaurant consultant, might disagree. She appreciates the atmosphere the izakaya create. “At izakaya, there is less worry about overdrinking or overeating, unlike at Korean drinking establishments where most people are drinking soju,” Park said. “Sake is less bitter than soju and it goes well with Japanese foods, which are usually less spicy than Korean foods. The portions are usually small, which means one can pick and choose.”


By Baek Hye-seon, Yoo Jee-sang [jbiz91@joongang.co.kr]
Tsukushi is one of the best examples of a true izakaya. The owner, Nishigawa, who has been the chef there for over 10 years, specializes in fried dishes and korokke, or fried bread with stuffing. Since he only makes 50 korokke a day, you’ve got to get there early to try them. Another one of Tsukusi’s attributes is its selection of over 80 different kinds of sake. Although some are quite expensive, it’s not difficult to find one that suits both your taste and your wallet. 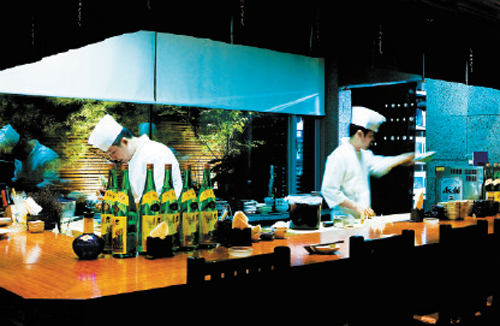 Shojin is a kappo-style restaurant, the description for which falls somewhere between a kaiseki restaurant and an izakaya.

The atmosphere is calm like the restaurant’s name, which means “temple food.” The rotating menu offers a selection of a la carte dishes and prix fixe meals. Most of the items are mild and go well with sake.

Among the more popular dishes are vegetables wrapped in tofu and sweet fig jelly.

The restaurant has a range of sake from different regions in Japan. The interior is pleasant. The prices are on the expensive side.

Across from Seorae Pharmacy in Seorae Village, Bangbae-dong, southern Seoul (02) 591-4649 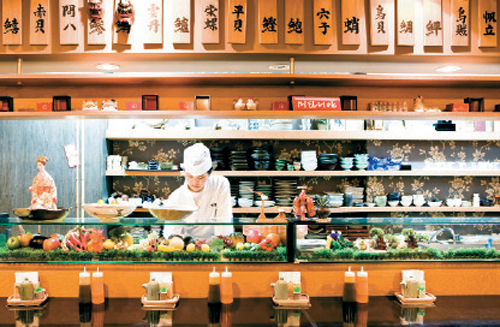 Mitaniya is a Japanese home-style restaurant by day but transforms into an izakaya at night. Both the exterior and interior of this establishment are somewhat worn, but that only adds to the overall feeling of comfort. The owner, Misaki Mitani, who was one of the first to introduce izakaya to Korea, makes an especially good nabe udon, or noodle soup. The plump, chewy udon noodles are enhanced by sakes like Honjozo and Junmai. 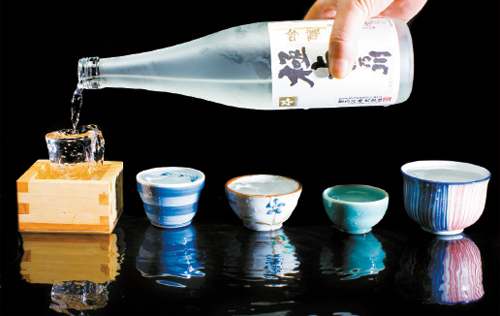 Muntaro serves skewer dishes comparable to those found in Japan. Specializing in yakitori, or Japanese-style skewered chicken, Muntaro insists on using fresh chicken meat instead of the frozen kind found at many yakitori places in Korea. The owner greets his guests from the grill in the center of the restaurant. For the adventurous eater, there are plenty of exotic delicacies to try, including chicken skin and chicken aorta. 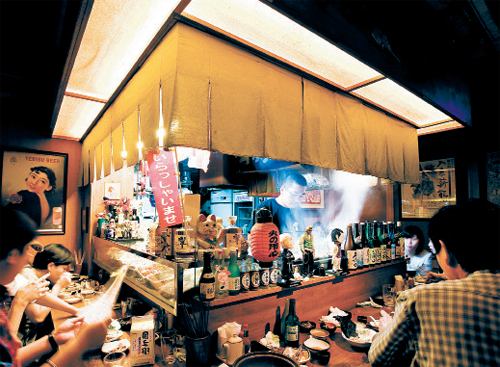 Muntaro, At Muntaro in Itaewon the seats quickly fill up with the after-work crowd. All photos by Kwon Hyuk-ja

Haikaraya is the first franchise to come here directly from Japan. The trendy interior makes for a pleasant environment and complements the food and sake. Because it is a franchise, the food and drinks on offer here are relatively inexpensive.

Kazen is another Japanese chain with over 70 branches in Japan but only one in Korea. Unlike other izakaya, Kazen has a modern interior filled with jazz music. The handmade tofu is irresistible. Other dishes are savory and most are low in calories. The drink menu goes beyond sake and beer to serve up fruit cocktails called sawa.

Tsukiji is an upmarket kappo-style restaurant. To make its dishes as authentic as possible, the restaurant has many of its ingredients flown in directly from Japan. Tsukiji is known for its lightly-smoked mackerel sashimi. The roasted crab and crab intestine are also popular. The chefs will also create personalized menus based on any budget and taste. Prices for the regular menu are somewhat expensive.


Sake is the drink of choice at izakaya, though there are plenty of options, including beer, soju and whiskey.

In Japanese, sake is actually just a word for liquor. When Japanese people speak of sake, however, they are referring to the beverage that is produced by fermenting rice.

With the increasing popularity of sake in Korea, especially among young people, sake imports jumped last year to 1,866 tons.

Lee Eun-jeong, 38, a sake enthusiast we met at one izakaya, provides some insight into the leap in sake sales as well as the steady stream of customers that have fueled the growth of the izakaya here.

“Sake matches the atmosphere and the food at the izakaya,” Lee says. “Also, there are many different flavors of sake, but true sake connoisseurs base their choices on the different breeds of rice from which the liquor is produced and the year and location of production.”

The rice used to produce sake is different from that used for food, in that the grains are 1.5 times bigger than the grains in the rice eaten at home. One of the most widely used varieties of rice for sake is Yamada Nishiki. Its larger grains make it more difficult to harvest, which makes it twice as expensive as regular rice.

Sake can be served either hot or cold, depending on product quality, season and personal preference. Reishu is a popular type of sake in Japan that is usually served chilled. Low-quality sake is usually heated before it is served and is called atsukan, or warm sake.

Sake is generally served in a small cup called an ochoko, which, according to Japanese custom, constantly needs refilling because one should never let their companion’s sake cup become empty - a good thing to remember the next time you find yourself at an izakaya.