The luxuries of time

The luxuries of time 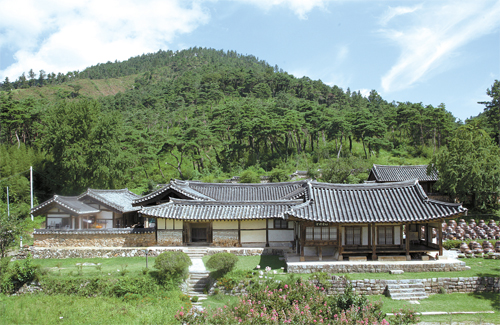 We urbanites lead a fast life in an unstable world. It has its advantages, but sometimes we long for something old, something constant - something that stays in one place.

Fortunately, that’s a perfect description of the traditional homes that have been tucked into the Korean mountains for hundreds of years. These old mansions offer comfort and familiar hospitality, just the thing for the burned-out desk jockey.

At one of these traditional mansions scattered across Korea, visitors can refresh both body and soul. Lay down on the wooden floor of the open hall, overlooking a garden full of scarlet flowers - crape myrtles and garden balsams - and bathe in the clean air.

One of the best regions to experience this old-fashioned living is Andong, North Gyeongsang, home to 47 traditional houses of various sizes. Nearly 50,000 tourists, including 8,000 foreigners, visited the town in 2008 and stayed at one of the old mansions - some of them the head houses of local clans - to experience the traditional Korean lifestyle. The homes in Andong can accommodate about 1,800 guests per day in a total of 303 rooms.

About half of the 635 old mansions in Korea are located in North Gyeongsang, and the provincial government is working on a 600 million won ($477,000) project to promote these mansions as a national tourist attraction. One of these efforts to boost tourism was the recently held North Gyeongsang Province Head House Forum.

One of Andong’s most famous old homes is Imcheonggak, located on the way to the Andong Dam, once the residence of Seokju Lee Sang-ryong, who served as the first prime minister of the Provisional Government of the Republic of Korea. The 99-room wooden house was built in 1519 in the mid-Joseon period (1392-1910), and is considered a world-class piece of architectural heritage. In 2004, Imcheonggak was opened to public view. The complicated layout is both open and closed, with the inner house, middle house and guesthouse flawlessly connected to a series of gardens. For a relaxed stay in a serene environment, Imcheonggak is the perfect spot.

To get a glimpse of the fall color, take a walk across Wolyeong Bridge, overlooking the picturesque lake near Andong Dam. The octagonal pavilion and observatory in the middle of the bridge offer a fantastic view of the illuminated lake and its colorful fountains, making it a favorite date spot for couples.

Right next to Imcheonggak is Chilcheungjeontap, a seven-storied brick pagoda designated National Treasure No. 16. This structure, the oldest and biggest brick pagoda in Korea, was built in the Unified Silla Period.

Imcheonggak hosts guests in seven rooms in the main house and guesthouse, and a stay includes access to the gardens. For reservations and detailed information, please visit www.imcheonggak.com or call (054) 853-3455.

Nongam Jongtaek, the head house of the Yeongcheon Yi clan, is the birthplace of poet Nongam Lee Hyeon-bo (1467-1555), whose most notable work is “The Fishermen’s Song” (not to be confused with “The Fisherman’s Calendar” by Yun Seon-do). This is one of the most well-known traditional houses in Andong, and the descendants of Lee’s direct line have been living in the house for over 650 years.

The mansion boasts a spectacular view of the fabulous gorges of Mount Cheongryang and the silvery sand along the Nakdong River. The remote location, far from the national highways, offers a quiet vacation for those looking to relax. Nongam Jongtaek has 20 rooms for guests, including an annex for a more private stay. You can also enjoy rafting on the river during the summer. While at Nongam Jongtaek, make sure to taste traditional local cuisine such as the sweet rice drink sikhye, songpyeon rice cakes made with potatoes and Andong noodles. For more details, visit www.nongam.com or call (054) 843-1202.

A stay at a traditional mansion runs from 50,000 to 150,000 won during the high season. Twenty-one museums and exhibition halls can be found all over Andong, so a tour will give you insight into local treasures and cultural properties. The Andong Folk Museum features an exhibit on the traditional gwanhonsangjae, the four major ceremonies that Koreans used to go through from birth to after death: the coming-of-age ceremony, wedding, funeral and ancestor worship service. The museum also showcases traditional food, clothing and shelter, as well as folk religions and games.

Not all the mansions are self-containted: All of Hahoe Village, the one-clan community of the Pungsan Yu family, has been designated Important Folklore Material No. 112. Here, national and folk treasures wait behind every corner. 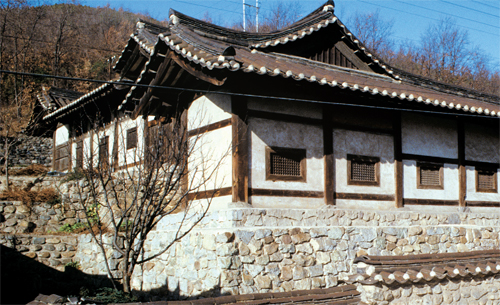 Andong Dam, built to control flooding on the lower Nakdong River, maintains a lake filled with 1.25 billion tons of water, which means cruises and fishing are close by.

Myeongjae Gotaek in Nonsan, South Chungcheong, was the residence of Myeongjae Yunjeong (1629-1714), a great Joseon scholar, and is visited by some 30,000 tourists every year. The structure was designed and built over 300 years ago, but the rational design and flawless maintenance make it a must-see for aspiring architects and those interested in feng shui, according to the master of the house, a 12th-generation descendant of Yunjeong. In 2008, former Soviet leader Mikhail Gorbachev visited the mansion.

Situated at the foot of Mount Noseong, Myeongjae Gotaek is an 82-room building built in the square layout that is typical of the Chungcheong provinces. It consists of a main house, an annex, a guesthouse, a storehouse and a shrine. The mansion’s celebrated scientific design brings in the fresh air longer during the summer, drawing it into the open space between the main house and the storehouse, while blocking the wind during the winter for added warmth.

The main doors to the guesthouse slide and turn on hinges at the same time, rare for the time. The daecheong, the open wooden floor that played the role of a living room, is elevated so that the mistress of the house could look out across the village. The serene pond in front of the gorgeous guesthouse is surrounded by centuries-old crape myrtles and Japanese cornelian cherries.

Myeongjae Gotaek operates various programs such as coming-of-age ceremonies and tea ceremonies, and you can even have a traditional wedding there. The annex has six rooms for guests, each room ranging from 60,000 won to 110,000 won, depending on the size. For more information and reservation inquiries, please visit www.yunjeung.com or call (041) 735-1215.

Seon Byeong-guk Ga-ok, the 99-room head house of the Boseong Seon Clan in Bo-eun, North Chungcheong, is situated in the middle of a thick pine grove. A hundred years ago, the master of the house at the time, a seafood merchant, recruited only the best carpenters from all around the country to build this architectural masterpiece out of red pine trees from Mount Songni. The great labor took 23 years to complete and has been designated Important Folklore Material No. 134.

A typical house of the landlord class, Seon Byeong-guk Ga-ok features spacious rooms and higher ceilings compared to other traditional houses, illustrating the changing hanok style in the late Joseon period. The site of the house was thought to be propitious, since it is shaped like a lotus flower floating on water.

Originally, the house was built on a vast 24-acre site, with 134 rooms in the main house along with a guesthouse, shrine, gatehouse, servants’ quarters, kitchen garden, a terrace for spice jars and a garden, but it was partially destroyed during the Korean War (1950-53).

Last year, over 30,000 tourists visited the mansion. The hundreds of jars with pepper paste, soy paste and soy sauce lined up on the terrace are a fascinating sight.

The 21st-generation mistress of the house, Kim Jeong-ok, says that she makes a paste of dates, the specialty of Bo-eun, in addition to the traditional pepper paste. The date paste is naturally sweet and nutritious and appeals to young people more than the sometimes hard-to-swallow traditional concoctions.

The region is known for producing many notable scholars, so many students studying for national examinations come here for an extended stay, inspired by that reputation. The house offers five rooms for tourists, including a family room and a group room, and the guesthouse serves as a tea house. Rooms range in price from 50,000 to 120,000 won. The group room can accommodate up to 30 people for 240,000 won. The house’s Web site is www.adanggol.com, or call (043) 543-7177.