The joy of leaving your car behind

The joy of leaving your car behind 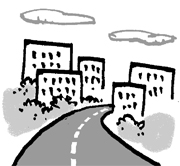 In the spring of 2004, Italian scientists solved an old problem. They successfully created the automobile devised by Renaissance genius Leonardo da Vinci. The automobile was made out of wood according to a blueprint in Codex Atlanticus, da Vinci’s bound set of drawings and writings. Although it is presumed that the vehicle was envisioned as an exhibit rather than to actually run on the road, the scientists finally got it up and running.

Automobiles started to run on the road around 120 years ago. In 1885, Karl Friedrich Benz developed a tricyclic automobile with a gasoline engine he created. In 1891, he created a four-wheeled automobile, too.

American Henry Ford was the man who ushered in the era of the automobile. The Model T introduced by the Ford Motor Company in 1908 was sturdy, easy to drive and inexpensive enough so as to be affordable for the middle class. The company sold 16 million Model Ts before production was ceased in 1927.

In the 1920s U.S. motor companies started buying commuter trams in cities like Los Angeles. They reduced the number of times trams ran in a day to make tram use inconvenient, and ultimately stopped tram operations because of a supposed deficit. America’s automobile culture was firmly established in the 1950s when highways were built throughout the nation.

Today, around 900 million automobiles run on roads around the world. The number of automobiles in Korea last year was 16.79 million, which is 1 per 2.95 persons. Considering the small size of our country, this is no small number. More than 80 percent of the vehicles on the roads in Seoul during the morning commute still carry only one person, and the roads are so packed that the average speed in central Seoul is just over 20 kilometers per hour (12 mph). That’s not much faster than a carriage in medieval times.

Korea will participate in “International Car-Free Day” on Tuesday, Sept. 22. The event started in France in 1997 and has continued in this country since 2001. It is said that the absence of cars on this day last year helped decrease the amount of traffic and air pollutants in central Seoul by 20 percent.

There are many reasons why it is not wise to drive around in a vehicle that weighs hundreds of kilograms and burns hundreds of liters of gas just to move one person.

Perhaps people will feel the joy of discovering a different world when they leave their cars behind to get where they are going on Tuesday.