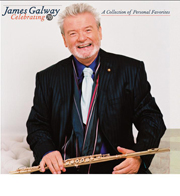 Have you heard of “the man with the golden flute?” Ask anyone and they’ll probably admit they’ve heard of James Galway.

Galway is one of the first flutists with an international solo career, and his music has inspired audiences and artists alike for 50 years. His popularity stems from his remarkable talent and delightful stage presence.

The flutist turns 70 years old on Dec. 8. To mark the occasion, this special CD was released in his honor. The music on the album ranges from Bach, Mozart and Vivaldi to “Danny Boy” and “The Pink Panther Theme.” My favorites include the Andantino from Mozart’s Concerto For Flute & Harp, K. 299 In C Major and Jay Ungar’s “Ashokan Farewell.” Galway’s famous sweet tone invites the listener to become completely lost in the poetry of the piece. Another track that caught my attention was his version of Claude Bolling’s Suite for Flute and Jazz Piano, which was first performed by Jean-Pierre Rampal 30 years ago. I was expecting another boring replica of the original song but to my surprise, this version really swings!