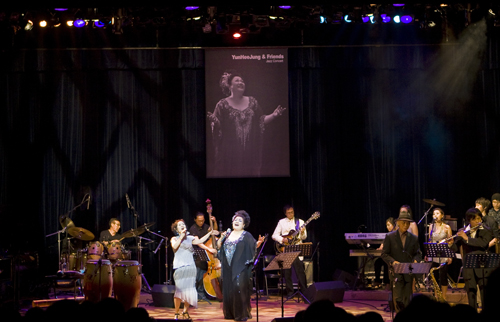 Yun Hee-jung has been at the forefront of promoting jazz music for more than a decade. [JoongAng Ilbo]

Yun Hee-jung is what some would call an ambassador of jazz music.

Koreans’ interest in jazz has increased greatly in recent years, escalating along with the burgeoning wine culture sweeping the nation.

The nation’s newfound love for jazz has already given rise to jazz festivals, jazz clubs and a new generation of jazz artists.

But back in the 90s, when Yun first started performing, the Korean jazz scene was akin to “uncultivated land,” she says. Jazz musicians and jazz concerts were few and far between.

Yun debuted as a pop singer in 1971. She didn’t discover the world of jazz until 20 years later.

“There is that ‘blur sound’ in jazz that sits between two notes. It was so mysterious that I was strongly drawn to the genre,” Yun said.

By night, Yun, 56, is a regular grandmother whose primary delight is watching her grandchildren grow up and lavishing them with affection. By day, she is a jazz singer as passionate and energetic as any teenage pop star.

I met Yun at her brunch concert at the National Museum of Korea last week. Brunch concerts, often held from 11 a.m. to noon, are a new fad here in Korea. The target audience for these concerts is middle-aged women, or ajumma, who organizers call the “minorities of the culture sector” for the fact that, with so many household responsibilities, few find time for cultural entertainment.

Yun’s “ajumma-next-door image,” along with her vibrant onstage presence, jokes and mannerisms, seems to appeal to the ajumma audiences that now fill the brunch concerts.

Yun takes great care in making sure her repertoire is customized for her audience. For example, she has translated well-known numbers like Frank Sinatra’s “All the Way” into Korean.

But the brunch concerts are just one part of what Yun does to promote jazz. Since 1997, she has been working on a project called “Yun Hee-jung and Friends,” a series of monthly concerts featuring influential Korean people in various fields, including CEOs and TV celebrities. She began by approaching influential people in Korean society and offering to teach them to sing. She holds concerts with them every month.

Yun has taught vocal jazz techniques to more than 240 people who have appeared on stage with her, including high-profile figures like Song In-jun, a former Constitutional Court judge; Hong Sa-deok, a Grand National Party lawmaker; and Lee Ha-nui, a former Miss Korea-turned-actress.

The lessons are three months long, and Yun teaches for free. She says that not once has she failed to bring out the hidden jazzy side of the people she has taught.

“There is a saying that ‘in jazz there is no composer, only a performer.’ That’s to say that it’s all about how you register something and express it. Anybody can learn jazz, and that’s why I love it,” she said.