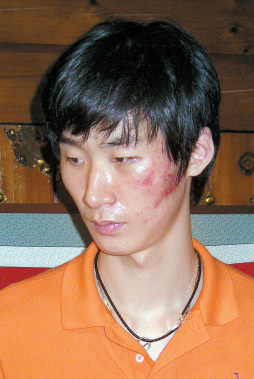 The Korea Volleyball Association has suspended one of its national team coaches, Lee Sang-yeol, indefinitely for allegedly beating one of his players. The standing committee of the KVA reached its decision following a meeting Saturday. National team head coach Kim Ho-chul, Lee and Park Chul-woo - the player on the receiving end of the assault - were in attendance at the meeting held at the KVA headquarters in Seongnae-dong, eastern Seoul.

The decision was reached swiftly by the KVA after Park held a Friday press conference. Although the ruling is expected to stand, another meeting with the committee in charge of player protection will be held today before the ruling is finalized.

At his press conference, the 24-year-old athlete appeared with a sizeable welt on the left side of his face and also showed another bruise on his abdomen. He presented a diagnosis stating he would need three weeks to recover from the wounds. Although incidents of assault and violence in sports are occasionally leaked to the press, it is rare for a Korean athlete to hold a press conference on such matters. The KVA is said to have tried to discourage Park from doing so.

“I was assaulted by Coach Lee at approximately 6 p.m. on Thursday after a national team practice at the National Training Center,” Park said on Friday. “It happened with my teammates looking on. Without a clear reason, Lee hit me in the face and the abdomen area with his fists and feet. I have symptoms of a concussion and ringing in my ear.”

A KVA official who received written statements from Park’s teammates stated Lee acted irrationally when Park showed signs of disobeying the coach’s orders. The national team had been preparing for the 15th Asian Senior Men’s Volleyball Championship to be held from Sept. 26 to Oct. 5 in the Philippines. A ruling on Kim, who has indicated he will bear responsibility for the incident, will be reached at the conclusion of the Asian tourney. Park has been left off the national team roster for the tourney due to his injuries.

KVA officials said they will do everything in their power to prevent such incidents. They stated they would have stiffer coach evaluations, periodical guidance and counseling sessions open for players and violence prevention programs. However, it is expected the KVA will be criticized for the way it has handled the incident.

And judging by Park’s statements from the Friday press conference, this was not an isolated incident.

The KOC has stated it would like for the KVA to press criminal charges while Park and his family have said they oppose the idea.