The tangled web we weave

The tangled web we weave 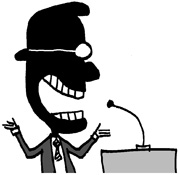 Animals sometimes tell lies. There are “watchdog” birds that make loud warning cries to let other birds know when enemies are near.

They once were considered noble birds for risking their safety for the good of the flock. But Charles Mann, a zoologist, discovered the hidden side of watchdog birds.

He found out that watchdog birds in the tropical rainforest along the Amazon often make false warning sounds. While other birds fly away in a hurry, the birds that called the alarm fetch food leisurely and feed their chicks.

A type of female firefly known as the Photuris tricks others with its false glow. It sends out false love calls by imitating the glow of another kind of female firefly, Photinus, and preys on any male Photinus that approaches.

They are, of course, no match for the slyness of human beings. There is a theory that the reason why the human cerebrum grew rapidly at the later stage of evolution was because of the competitive development of the ability to tell lies and the ability to catch them.

At any rate, it is reasonable to say that almost all people, regardless of their sex or age, tell big or small lies every day.

In a recent survey conducted on 2,000 British people, it was found that men told lies six times a day and women three times. The most common lies men told included: “This will be my last beer” and “My cell phone was out of power.” On the other hand, the favorite lies for women were: “This is not new, I had it before” and “It was on sale, so I bought it.”

According to another survey conducted by East Carolina University in the United States, the most frequent lie told by men was “I love you,” while the one told by women was “It was good” - referring to making love, of course.

Among humans, I have to wonder whether politicians are the masters when it comes to lying. I say that because they think it proper to say what people want to hear, instead of telling them the truth.

One good example was George H.W. Bush, who won the U.S. presidential election in 1988 by telling a lie, in spite of a huge financial deficit, to Americans: “Read my lips: no new taxes.”

His successor Bill Clinton skipped around his critics during a series of sex scandals with deftly chosen words.

Therefore, a politician can easily be treated like the shepherd boy who cried wolf, even if he tells the truth. That is the case with U.S. President Barack Obama, who is labeled as a liar as he rolls up sleeves to fix a health insurance system that is full of problems.

President Lee Myung-bak, whom some criticize as a crook for advocating pragmatic middle-of-the-road policies because of his humble roots, might be feeling frustrated with himself.

As the old saying goes, “You can’t fool all of the people all of the time.” We will come to know the truth if we wait a little longer.