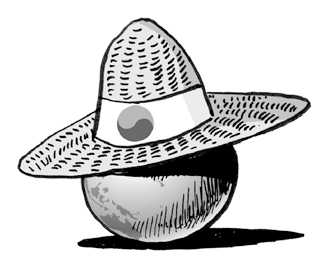 Manchuria, which is over three times wider than the Korean Peninsula, was mostly undeveloped some 200 years ago.

The population at the time was only between one and three million, and the land was officially designated a “forbidden land” by the emperor of the Qing Dynasty, making it difficult for people who were not ethnic Manchu to enter the area.

Despite Manchuria’s status as off-limits, many Koreans were accepted as indigenous people in the region. There was even a Korean troop among the Eight Banners that invaded Beijing in 1644 to defeat the Ming Dynasty.

But full-scale immigration of Korean people started after the mid-19th century when Qing rule over mainland China weakened.

Korean farmers who went to Manchuria took with them their rice farming know-how. After they succeeded in growing decent rice in Manchuria from 1875 onwards, their farming skills spread like wildfire.

Korean farmers jumped into icy water to build dams to divert the course of rivers and cultivated natural grassland and marsh. They turned waste land into fertile soil.

Nowadays, Manchuria has become one of the major rice producing places in the world with an annual harvest of tens of millions of tons.

Modern Korean people inherited the frontier spirit from the farmers of the Joseon Dynasty. They frequented export markets in remote countries and overseas construction sites, as if they were cultivating barren land.

In the beginning of the 21st century, soaring grain prices in the international market stirred the ancient farmer within Koreans, awakening them from a long sleep.

Some front-runners went to the Maritime Province of Russia in East Siberia where one can still see the results of the work Korean farmers did years before.

Starting with rice farms developed by the Religious Order of Daesoonjinrihoe and Agro Korea, many other organizations, including Intops, Hyundai Heavy Industries, Namyang Aloe and Northeast Asia Peace Movement, have either started to cultivate large-scale rice farms on rented land or are planning on doing it.

President Lee Myung-bak also proposed to the North that they develop jointly in the Maritime Province by renting land there.

Now, it is not difficult to meet Koreans who cultivate land in Southeast and Central Asia. Africa is no exception.

Last week, the Korea Rural Community Corporation announced that it would create farmland 1.5 times the size of Seoul at the Pwani Delta area in Tanzania.

I sincerely hope that the corporation would offer hope to hungry Africans and show them a new model for mutual cooperation by demonstrating Korea’s advanced farming skill.