Almost everyone has a cell phone these days.

In Korea, considering that the number of subscribers to mobile communication services was 47.39 million as of the end of July, according to the National Statistical Office, and the nation has a population of 48 million, it is estimated that there are very few people without one.

It would not be that surprising, then, if public phones were to disappear. After all, who is going to take the trouble to look for a pay phone when they’ve got a mobile in their hand?

However, the situation is somewhat different from what one might expect.

Amazingly enough, there are still 153,000 public pay phones across the country, but more and more of them are disappearing. In 1999, for example, when long lines in front of public phonebooths were a common sight, the number was 560,000.

So who or what is keeping the remaining pay phones from going the way of the rotary dial phone and slipping into obscurity?

To find out, this reporter recently visited 10 of the busiest public phonebooths in Seoul.

Each booth posts sales of around 700,000 won ($578) per month, which is about 35 times the average of 20,000 won per month rung up by phonebooths around the country, according to public phone service operator KT.

“I’ve lived in the neighborhood for the past 16 years and this public phonebooth has been here since I was very young,” said Lee Su-min, who had stopped off at a call box at a shopping center near the Cheonggu Apartment Complex in Banghak-dong, Dobong District, last Wednesday afternoon. It is the one of the 10 most frequently used booths in Seoul. 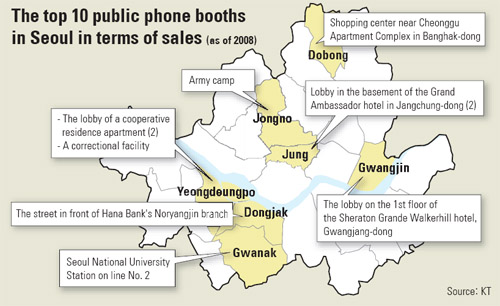 “I came here to call my girlfriend because I lost my cell phone yesterday,” said the 21-year-old college student, who had a handful of coins in his hand. “As I was looking around for a way to call her, it occurred to me that there was a public phone here,” added Lee, who is apparently not a regular pay phone user.

The next person who stepped into the booth was a middle-aged woman.

“Although I always carry my mobile with me when I go downtown, I often leave it at home when I’m running errands around the neighborhood,” said Seo Ok-hee, a 51-year-old housewife who was carrying a shopping basket with her. “I stopped by to make a call because I’m now without my mobile, as you can see.”

The phone used by Lee and Seo was the only pay phone in the neighborhood that accepts coins instead of phone cards. That seems to explain why the two of them - who both needed to make calls on the spur of the moment - chose that particular phone, instead of the phones nearby, which only accept cards.

The phone’s location also seems to make it more popular. It is right next to a local bus stop.

Also on the top 10 phone list is a public phone within Seoul National University Station on line No. 2. So I headed south to check it out.

“I often make calls here because we’re not allowed to bring our cell phones to school,” said Choi Hye-jin, a 17-year-old high school student who was standing in front of one of the phones last Wednesday evening. 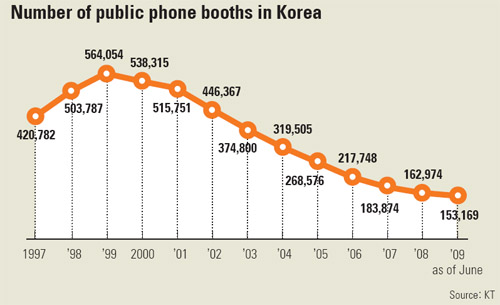 “I make a point of stopping here every day on my way home from school to call my friends,” she added.

The phone Choi was using and the two next to it each report sales of 700,000 won a month.

Again, location is the key to the high sales figures. The station is one of the most frequently visited in the city, with an average of 90,000 people passing through it every day. That’s almost double the number of people going through other stations (50,000). In addition to SNU, there are many other schools in the neighborhood. Quite a few businesspeople pass through the station as well, which contributes to the high user numbers.

Although public phones are generally used by people who forget to carry their mobiles, there are other special cases that push people toward the public phone option.

“I stopped here to call my friend because I have no cell phone,” said Tony, a 21-year-old who introduced himself as an exchange student from the United States. “I don’t subscribe to a local mobile communications service because it is difficult for me to do so as a foreigner, and after all, I’m only here for a short time,” he added.

“The reason why I use public phones is because I have no choice,” said Kim Byeong-mu, 52, another public phone user at Seoul National University Station. “I’m not eligible for a mobile service subscription because of the bad credit rating I earned as a result of my business failure.”

A public phone on the street across from Noryangjin Station is also on the list. The neighborhood supports a large number of hagwon, or private educational institutes, for people preparing for various state examinations, and the three phonebooths are located near a local bus stop, which apparently contributes to the high sales they are able to achieve.

“I suspended my mobile service in an effort to concentrate on my studies,” said Kim Min-su, a 30-year old who said he is preparing for the civil service examination. “So I use the pay phone here when I need to make a call,” he added.

A gimbap vendor near Noryangjin Station had another reason for not using a cell phone - cost.

“I have a cell phone, but I don’t use it so often due to the high rate,” said Im Sun-rae, 45. “I call my kids at home to see if they’re O.K. because they’re there by themselves,” she added.

One man admitted to having a secret reason for using the public phone.

“I have a girlfriend and I use a pay phone to call her for fear that my wife will check my cell phone records to see if I’m calling her,” a 47-year-old married man who identified himself only by his surname Lee, said warily, adding that he makes calls from the pay phone to call his girlfriend two or three times a day. 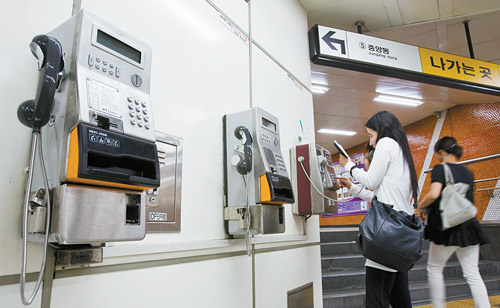 Of the three public phones at Seoul National University Station, only the one on the left accepts both transportation cards and coins, which makes it one of the most-used public phones in the city. By Shin In-seop

The other phones in the top 10 are located in a hotel, a residential quarter, an army camp and a correctional facility, according to data from KT.

Public phones were introduced here in 1902 and were operated by switchboards. The first unattended public phone was the Communications No. 1 Public Phone, which made its debut at a local industrial exhibition in 1962.

Another version of the public phone was the Direct Distance Dial phone, which was the norm from 1983 to 2002. Pay phones accepting phone cards instead of coins were introduced during the 1986 Asian Games and are still in use today.

The latest kind of public phone arrived in 2007 and takes transportation cards as payment. This service even allows users to send text messages.

As public telecommunications services improved over time, pay phone usage peaked in 1999 with a total of 560,000 booths in operation that year. Since then, however, pay phone usage has declined, falling to 153,000 in June.

Meanwhile, public pay phone operators have been tens of billions of won in the hole since 2000, leading some to question the need for the existence of public phones.

It costs 1 to 2.5 million won to install a public pay phone, but the national monthly sales average per phone stands at 20,000 won. About 20 percent of the public pay phones in the nation have not been used in a year, according to data from the service operator KT.

“We provide public phone service for the good of the public, but we are deeply concerned about the increasing amount of debt they generate and are looking for a way out,” Yum Woo-jong, a public relations officer at KT, said.