The ‘Four Dos’ for climbing the ranks

The ‘Four Dos’ for climbing the ranks 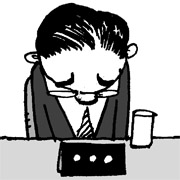 Kim Su-paeng, a deputy finance official, during the reign of King Yeongjo in the 18th century was a “legendary town official.” His integrity and strength gave birth to many famous stories.

When the finance minister delayed approving official documents because he was busy playing the board game baduk, Kim went up to the main room, swept the minister’s pieces off the board, went down to the garden, got down on his knees and said, “I have committed a dreadful sin, but please, approve the documents first.”

The minister could hardly punish Kim as signing the documents was urgent.

Another story goes that Kim was on duty one night when a palace official requested 100,000 pieces of gold, saying it was the king’s order. Kim stalled for a while and gave him the money after the sun rose the following morning because it was forbidden to handle ministry money at night.

One day, Kim Su-paeng went to the house of his younger brother, an official in a provincial town, and saw cases of dye in the garden. When his brother said, “My wife dyes as a side job,” Kim Su-paeng pushed over the cases of dye, saying, “We receive a salary from the country. If you have a side job on top of that, what will the poor people do to make a living?”

Kim Su-paeng’s thunderous voice contained the poor but honest spirit of officials of the Joseon Dynasty. The “Four Don’ts and Three Declines” were an unwritten law for Joseon officials. The “Four Don’ts” were, “Don’t have a side job, don’t buy land, don’t expand your house and don’t eat special products you get from your post.”

These rules explain why Yoon Seok-bo, a former governor of Punggi, the old name given to Yeongju, North Gyeongsang, resigned after he discovered his wife had sold a silk dress to buy a vegetable field. Another Joseon official wouldn’t even permit slight renovations to the roof of his hanok, a traditional Korean house.

According to the Three Declines, you should reject unjust demands from superiors, gifts for favors and money contributions for special occasions. When the Chief State Councillor asked Jeong Bung, deputy delegate of Cheongsong, North Gyeongsang, to send some honey and pine nuts, he answered, “Pine nuts are on top of mountains and honey is in the wooden beehives of private houses.” And minister Kim Su-hang punished an official who sent over a bolt of lace after hearing that the minister’s son had died.

Looking at the recent confirmation hearings at the National Assembly, it appears that the four don’ts and three declines have vanished. Instead, we have the “Four Dos,” which seem necessary now to become a high-ranking official. The four dos are false registration of a residence, tax evasion, draft-dodging and academic plagiarism.