Looking the part to play the part

Looking the part to play the part 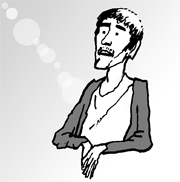 Many people who watched the 1983 film “The Ballad of Narayama,” directed by Shohei Imamura, were shocked at the director’s frantic devotion to reality. Imamura went to great lengths to accurately tell the story of a remote mountain village in the medieval era that abandons the elderly when they reach 70. The director, staff and actors actually lived in a remote village for three years cultivating land, making the smell of soil permeate their skin.

The actress Sumiko Sakamoto, who played the part of the grandmother, especially showed enthusiasm for her character. She played a scene where she broke her teeth by hitting her head against a stone wall, without any stand-ins or special effects.

I wondered whether that action was essential to the film, but the movie won the Golden Palm award at the Cannes Film Festival thanks to the lengths she took to realize her character.

Reflecting on the history of cinema, there were quite a number of actors and actresses who became legends by boldly putting themselves in harms way for the sake of their craft.

Many actors dared to change their outward appearance, even to dangerous levels, so that they could better fit the character they were playing.

Robert De Niro is a good example. He gained and lost 23 kilograms (51 pounds) when he played a boxer first in the height of his career and then in the decline in the 1980 film “Raging Bull.”

After winning the Academy Award for best actor with the film, he enthusiastically gained 27 kilograms and made his forehead look larger by removing hair to play the role of Al Capone in the 1987 film “The Untouchables.”

The talk of the town now is that Korean actor Kim Myung-min lost 20 kilograms for his role in the film “Closer to Heaven” which had its premiere on Thursday. Kim, who played the role of a Lou Gehrig’s disease patient, was initially 72 kilograms, and reduced his weight to a skelatal 52 kilograms when he performed the scene preceding his character’s death.

That Kim’s change of weight was considered the mark of an enthusiastic actor, is the legacy of the time when there was something that actors, regardless of their fame, could not change.

Marlon Brando put on makeup to give himself a hooked nose when he played the role of Napoleon Bonaparte, but he could not change his stature of 1.75 meters (5 feet 9 inches). Nowadays, however, it is quite commonplace for an actor’s height to be digitally changed on screen. Elijah Wood, for example, is 1.67 meters tall, but was portrayed as being 1.2 meters when he acted in “The Lord of the Rings” trilogy.

Should we praise actors for their dedication in making actual changes to their outward appearance for a part, even in 2009 when computer graphics have become such a staple in film production?

If we should, why do people give cold receptions to actresses who choose to remain young forever by undergoing plastic surgeries that literally “grind bones and tear off flesh?”

This is one of the cases that makes me wonder to what the painstaking physical work of an actor means in this high-tech, CGI saturated era.