The horned house on top of the hill

The horned house on top of the hill 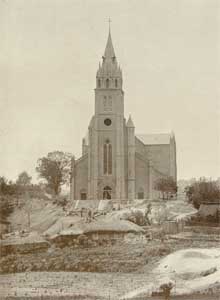 You may call yourself a Protestant, a Catholic, a Buddhist or none of the above. But regardless of what you believe in, often when we enter a religious building - a church, a temple or a mosque - we are showered with the inexplicable aura of holiness and spirituality. The sound of bells or a pipe organ, as well as the reading of the scriptures and the light coming through the stained glass windows, gives people a sense of calm and peace rarely found elsewhere.

One thing that shocks many of those who climb up to Mount Namsan to survey the city on their first visit to Korea is the view of so many red neon crosses dotting the cityscape.

As this striking scene reveals, Christianity is a huge force in Korea.

According to the latest figures by the World Council of Churches, Christians make up 41 percent of the population of 48 million South Koreans. Buddhists make up 20 percent and Confucianists 11 percent, among others. Of those who are Christian, Protestants are the largest group, with 8.8 million, followed by Independents with 8.1 million and Catholics with 4.4 million.

In particular, the growth rate of the Catholic population here is notable. The number of Catholics has increased by 2.7 percent every year on average over the past decade, while the overall population has moved up by just 0.8 percent annually.


Birth of a landmark

Earlier this year the Seoul city government released a list of 51 design properties selected for preservation, from among the city’s cultural, historical and environmental treasures.

Included on the list was Myeongdong Cathedral in the Myeong-dong area of central Seoul. It is a notable landmark for the city, having long been a feature on tourist and transportation maps. But for Korean Catholics, the building is far more significant.

Designated as Historic Site No. 258, it was the first parish in Korea as well as an important backdrop for the democracy movements of the 1970s and ‘80s. 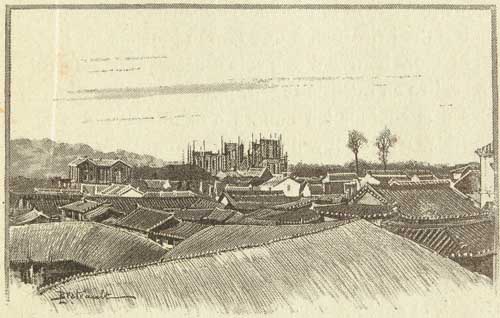 In 1883, French Catholics purchased land in the Myeong-dong area where the first Catholic community in Korea had arisen in the late 1700s.

Koreans have had an interest in Catholicism since the early 18th century, based on materials and information filtering into the country from China. But with such limited information, it wasn’t until the late 18th century that the first faith community was formed here - with a book, a cross and a statue of the Virgin Mary.

Under the leadership of Lee Byeok (1754-1786), one of Korea’s early Catholic followers, the community began meeting in the Myeongryebang area, which encompasses today’s Myeong-dong, in 1784.

A year later, however, government officials arrested Lee and others because they thought the area was a hotbed for gambling. However, that was only the start of a series of prosecutions of early Catholic missionaries and believers in subsequent decades. At the time, the Korean government employed strict isolationist policies, shutting itself off from Western influences and beliefs.

Nonetheless, the number of Korean believers increased. According to the Catholic Bishops’ Conference of Korea, when Pierre Philibert Maubant (1803-1839), the first French missionary to Korea, arrived here in 1836, he reported the number of the Korean Catholics to be about 6,000. Two years later, it had risen to 9,000.

In 1883, French Catholics purchased the land in the Myeongryebang area, after the signing of a treaty between Korea and the United States in 1882 made it possible for foreigners to purchase land. They proceeded to build facilities for the Catholic community, including a study center, with the hope of eventually building a cathedral.

Four years later, construction on the cathedral began. French Bishop Marie-Jean-Gustave Blanc (1844-1890) who initiated the work, wrote in a report to his home country: “Men - young and old - came to work for days free of charge, braving the cold. The only things that warmed their frozen hands were faith and satisfaction.” 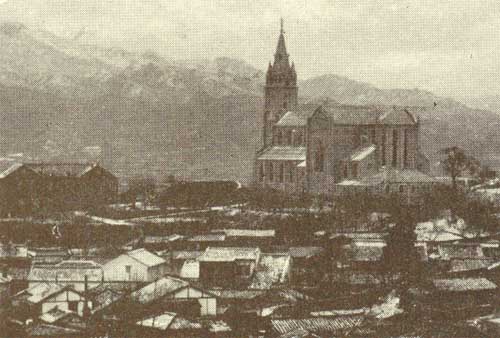 The Gothic cathedral was completed in 1898, leading people to call it the “horned house on top of the hill.”Provided by Myongji University-LG Yeonam Library

Later, construction was delayed due to disputes with the government over issues such as the ownership and location of the church and the death of Father Eugene Coste (1842-1896), the Frenchman who designed the building.

The Gothic cathedral was completed in 1898 on the land where the first Catholic community was formed. Today, it is known as the Vatican of Korean Catholicism.


Sanctuary within the city

The cathedral’s significance has extended beyond the Catholic community. In the 1970s and ‘80s, it was a key setting for the democracy movement.

Led by the late Cardinal Stephen Kim Sou-hwan, archbishop emeritus of Seoul, the church held services supporting democratization efforts, issued statements denouncing the military dictatorship and sheltered student protesters, sending them to other sanctuaries though third parties. Through this work and his advocacy for human rights, Cardinal Kim was a beloved spiritual and moral leader whose messages of love, respect and self-sacrifice earned him a place in the hearts of Catholics and non-Catholics alike.

Kim lived in the cathedral for 30 years while serving as the archbishop of Seoul from 1968 to 1998. He was once quoted as saying that the “Myeongdong Cathedral stands tall like a beacon that tolerates all turbulence and lights the world.” 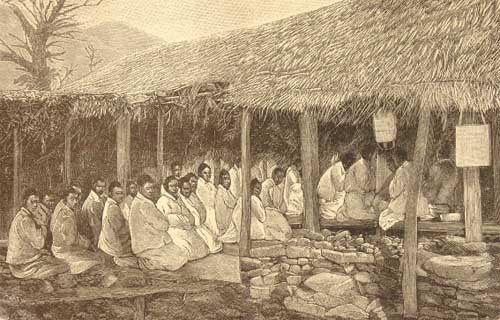 In the late 1700s, the first Catholic community in Korea was formed based on religious materials from China. Provided by Myongji University-LG Yeonam Library

Later, when another archbishop took Kim’s place at the cathedral, Kim lamented not being able to see the bright moon by the clock tower, priests there recollect.

In February, Cardinal Kim passed away and the cathedral was chosen as the site of his funeral. Hundreds of thousands of Koreans waited for hours in long lines, braving the icy weather, to pay their respects to the departed leader. A press room was set up within the building for the first time in its over 100-year-long history.

The funeral was not the only service for a major figure in Korea this year. In August the cathedral also hosted a ceremonial mass for the late President Kim Dae-jung, who was a devout Catholic. More than 2,000 people attended. 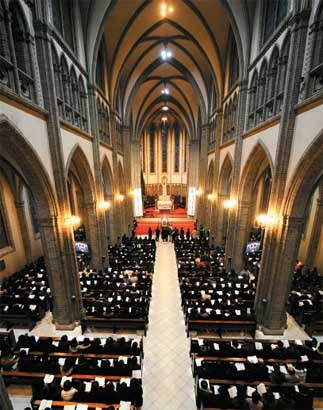 A funeral mass was held in the cathedral for the late Cardinal Stephen Kim Sou-hwan in February.[JoongAng Ilbo]

Today, Myeong-dong is one of the most crowded commercial districts in the city. In fact, it was ranked as the world’s 11th-most expensive shopping district in terms of rental rates, according to a report by the New York-based real estate consulting firm Cushman & Wakefield.

This means the cathedral is not as noticeable as it was when the French Catholics proclaimed “the bell tower of our church will have to look down the distant horizon.”

The city sprawl has taken over the once placid neighborhood and dwarfed the cathedral, once called the “horned house on top of the hill.” Now, we have to settle for glimpses of the storied structure amidst the high-rise office buildings and shopping malls that have come to dominate the area.