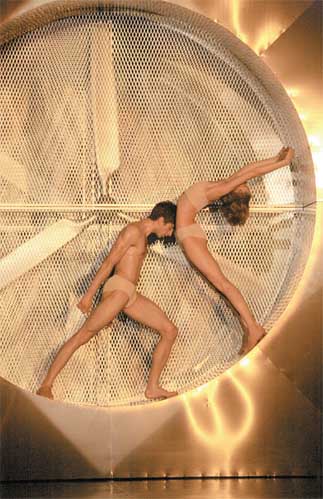 Italy’s Compagnia Alterballetto will close the festival with its rendition of “Romeo and Juliet.” Provided by SI Dance

The performances coming to town next month as part of the Seoul International Dance Festival are big, bold and inspiring. They weave tragic tales of love - and then tear them apart, mine the roots of Korean dance, invite speculation about what makes the traditional so and, through multidisciplinary collaborative projects, seem to question whether there are any borders that cannot be crossed.

This year’s festival presents 15 companies from as many countries in theaters and at outdoor sites in Seoul. It is an action-packed affair that has resolved to continue unabated in a time when fears of the flu have closed other events.

The opening performance is “Monger” by Israeli choreographer Barak Marshall, a Harvard-educated social theory and philosophy major who once worked with the Batsheva Dance Company and is returning to the stage after an eight-year absence. Monger tells the tale of 10 servants’ struggles to survive the harsh demands of a cruel and unseen mistress. It is built around a highly physical movement style and is set to the rhythms of the klezmer-infused Balkan Beat Box.

Closing the festival is Compagnia Aterballetto’s take on the “Romeo and Juliet” narrative. The Italian contemporary ballet company puts 10 couples on stage and deconstructs the narrative to parse the meaning of love, death and desire. It is one of two that takes on the Shakespeare story. The other is by Slovenia’s SNG Maribor Ballet, whose “Radio & Juliet” features the pensive and at times downright driving music of Radiohead and asks “What would have happened if Juliet didn’t take her own life?”

As a whole, the festival aims to “provide a broader channel for exchange between Korean and international artists, including companies from developing countries,” according to festival organizer, and willing interpreter, Lee-Yoon Soo Ryon. (Lee-Yoon provided interpretation for interviews with two Korean choreographers for this piece.)

It does this through presentations of collaborative works by artists from Korea and abroad. One of these is “Yellow Monkey” by Singapore’s Collective Mayhem, two female dancers from Singapore and the all-male Post Ego Dance Company from Korea. It questions the meaning of our existence and employs fast-paced movement and multiple media. Another collaboration, the Asia-Africa Dance Exchange, is an ambitious project involving artists from Burkina Faso, Congo, India and Malaysia. The artists spent three months here in a cultural immersion program and another three working with acclaimed Korean choreographer Lee Tae-sang. The resulting work is built around the image of a flightless penguin, which Lee says is a metaphor for the misconceptions we have about ourselves and one another as well as our attempts to communicate the unspeakable.

Communication and community thrive in a work directed by Jin Ok-sub, who is most recognizable for his work as the choreographic consultant for the film “The King and the Clown” (2005). Like the film, “The King’s Dance” explores the life of Yeonsan, who is largely remembered as a tyrant. But few know the king was also as a proficient dancer, and the piece focuses on this aspect of his life. It is performed by a cast that includes masters of Korean traditional dance. Jin’s hope is for audiences to enjoy the piece as they hum and sway in their seats along with the joyous celebration on stage.

The festival also includes several smaller works that might escape notice were they not so intensely intriguing. The Korean Identity Through Dance series, for instance, takes a look at the changing nature of Korean dance.

Performance is just one part of the fun. Dancing City continues the festival’s tradition of providing greater access to the arts through free site-specific performances at unconventional locations around the city.

“It’s important for us to provide audiences with opportunities to get in touch with dance, as well as provide another avenue for Korean choreographers to present their work,” Lee-Yoon said.