When starlets and sports stars fall in love

When starlets and sports stars fall in love 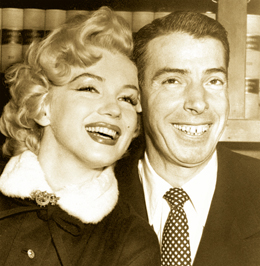 The blue sky can tumble down upon us

And the earth can also collapse

It doesn’t matter, if you love me

I don’t care about the entire world

As long as love floods my mornings...

If one day life tears you from me

If you die that you be far from me

It doesn’t matter, if you love me

Cerdan and Piaf met in America during one of Piaf’s tours in the summer of 1948, and the two began a love affair despite the fact that Cerdan was married with three children.

The couple is one in a long line of well-publicized relationships between female entertainers and male athletes.

Cerdan was a professional boxer and a popular figure in France and its territories. Boasting an impressive career record of 113 wins and four losses, he won the world title in the middleweight division after knocking out American Tony Zale in the 12th round in Jersey City, New Jersey, on Sept. 21, 1948. Later that year, he would go on to lose his title defense against Jake LaMotta in Detroit. The fight was to be Cerdan’s last.

In October of 1949 Cerdan was to start training for the rematch against LaMotta, but before he began, Piaf asked him to visit her in New York, where she was performing. He agreed and boarded an Air France Lockheed L749 Constellation, but he never made it to New York. He and everyone on the plane were killed when the plane crashed on an island in the Azores. 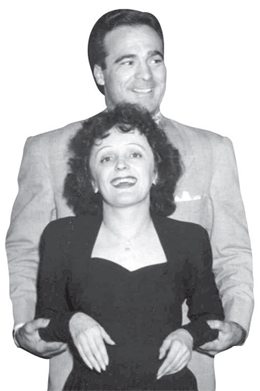 Piaf was said to have gone half mad from the guilt of knowing she had played a part in her lover’s death.

She had been planning to dedicate the lyrics to Hymne a L’amour to him before he died, and his death did not change her plans. She went on to record the song in May 1950.

Images of popular male athletes and beautiful starlets who are romantically involved are often splashed across the pages of the entertainment and sports pages. It raises the question of why star actresses and athletes are so drawn to each other.

It’s not so hard to imagine, really. Entertainers and athletes are both admired by the public and live lives that are different from those of the rest of us, which is the common ground that often draws them to one another.

Another famous actress-athlete couple was Joe DiMaggio and Marilyn Monroe. DiMaggio’s devotion to Monroe is well-known. The former Yankees center fielder, who is best known for his 56-game hitting streak in 1941, was said to have delivered a half a dozen roses to her grave three times a week for 20 years. 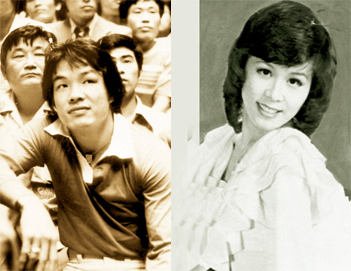 In Korea, the news of Seoul Heroes outfielder Lee Taek-keun and actress Yoon Jin-seo’s relationship drew quite a bit of attention from the public last month. Another notable couple is the FC Seoul forward Jung Jo-gook and entertainer Kim Sung-eun, who are set to tie the knot in December.

Whenever two public figures get entangled in a romantic relationship, people get interested. One of the most talked about love affairs of the late 1970s involved a former WBA bantamweight champion and a popular singer. Hong Soo-hwan, a 59-year-old former boxer, gained fame in 1974 by becoming the first Korean fighter to win a title on foreign soil by defeating Arnold Taylor in South Africa. However, Korean boxing fans may remember the feisty fighter for his famous bout against Hector Carrasquilla in 1977, in which he was knocked down four times in the second round prior to knocking out his opponent 48 seconds into the third round. That particular fight is still one of the most popular topics of conversation for boxing fans in Korea to this day.

For those with just a passing interest in the sport, however, Hong might be better remembered for his affairs outside the ring. He met singer Ok Hee on a radio program and was immediately smitten. At the time, however, Hong was married with two children and his wife was pregnant with the couple’s third child. In the end, the affair eventually broke up the marriage and he and Ok married in 1977.

But the story of their turbulent relationship doesn’t end there. Six months after earning the world title in 1978, Hong lost his title defense against Ricardo Cardona and things started to fall apart. Hong and Ok divorced after Hong assaulted Ok in 1979. He would then immigrate to America before returning to Korea in 1992. Two years later, the couple got remarried. 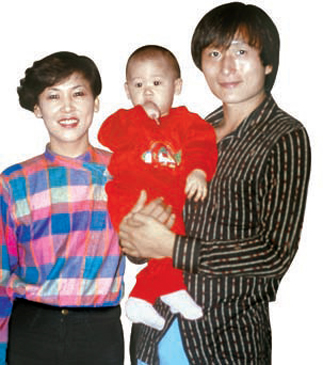 “Celebrity couples need to live their lives without worrying too much about what others might to say about them,” Hong was quoted as saying in an interview a few years back.

Current Korean national football team manager Huh Jung-moo and entertainer Choi Mi-ran are another well-known couple. The two have led a happy life together for many years.

“Athletes and entertainers are similar in that both lead unpredictable lives with many ups and downs. When I was still playing, I don’t think I could have overcome the difficulties without the help of my wife,” Huh said.

“Generally speaking, athletes are gentle and honest. I would have to guess that female entertainers who tend to be sensitive and romantic are charmed by athletes’ innocence,” explained Ahn Yong-gyu a professor in the field of sports philosophy at Korea National Sport University. “Athletes who dedicate most of their time to practice and workouts, tend to find female actresses who are beautiful and romantic attractive.”

It may all seem like a fairy tale, but even celebrity couples experience relationship woes. They argue and break up like any other couple. Take for example the late Choi Jin-sil and former Korea Baseball Organization and Nippon Professional Baseball pitcher Cho Sung-min. Their marriage drew a huge amount of public interest but later ended in a messy divorce.

Sometimes, the thing that brings a couple together - celebrity - is also the thing that breaks them apart. A loss of popularity or income for one person can lead to a rift in the relationship. The obsessions of fans can also cause problems for a couple. But the biggest obstacle may be the lack of time the two have to spend with each other. Athletes are required to travel throughout the season. In addition to out-of-town games, they also have to participate in training camps abroad in the offseason and international games if they are selected for the national team. Entertainers are just as busy with their filming and performance schedules.

Celebrity couples with successful marriages like Huh and Choi have marriages that aren’t so different from any other. And just like any other relationship, understanding is the key to success.