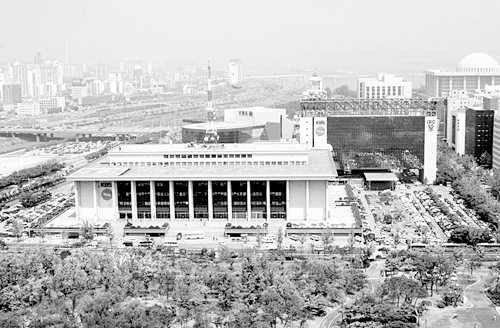 If KBS finds it burdensome to operate many channels on just its subscription fees, privatizing some of its channels should also be considered. [JoongAng Ilbo]

It was a rise of around 3.6 times in just 10 years. Sales at the JoongAng Ilbo rose 5.7 times, while the Chosun Ilbo earned 6.5 times more in sales over that period.

What was it about that time that was such a boon to newspaper companies?

The second factor was the media policy of the military regime. Even as the advertising market grew, the government stopped new players from entering the market. Nobody dared to talk about the unconstitutionality of this entrance barrier. That was just what the 1980s were like.

As the wall that prevented new players from entering the market was so high while the advertising market was growing, existing media companies enjoyed rapid expansion thanks to their established positions.

But today the newspaper industry is experiencing difficulties because the two factors outlined above have changed.

First, long ago the Korean advertising market stopped growing. Some in the media industry say that the market will revive when the economy recovers. However, the pessimistic view is stronger than the optimistic view.

Generally, advertising expenditure does not grow beyond 1 percent of GDP in an advanced country. Therefore, the argument that Korea’s advertising market will stop growing because it has already reached 1 percent of the GDP is persuasive.

In the special situation that Korea finds itself - with its economy mainly targeting overseas markets instead of domestic consumers - the idea that advertisements aimed at Koreans have already reached their peak also makes sense.

In addition, anyone can publish a newspaper at any time, anywhere nowadays. On top of that, new media such as cable TV, satellite TV, IPTV and the Internet are proving themselves brutal competitors. It has become a global trend for advertisers to divert advertising expenditure they once devoted to newspapers and broadcast media to new media such as the Internet.

Considering these changes, the future of the Korean newspaper industry seems, in a word, bleak.

The government and the ruling party, recognizing the situation of the newspaper industry, have passed a media law to permit cross-ownership of newspapers and broadcasting companies.

The Constitutional Court will soon decide whether that law was adopted according to proper legal procedure. Regardless of the court’s decision, there is one thing the government authorities must do. They must scientifically calculate and announce how much the Korean economy will grow in the future, and on what scale the advertising market will be in accordance with that growth.

Expenditure on advertising, including production costs, currently reaches a total of around 10 trillion won. Around 3 to 4 trillion won is spent on broadcast advertisements.

At the moment, as many broadcasting companies have to share a piece of pie, they cannot help but take losses.

In a situation like this, if it is anticipated that the broadcasting advertisement market will not grow larger than the 4 trillion won range, it will be a burden to add one comprehensive content channel and one news channel on top of them.

If more than one comprehensive content channel and news channel are permitted, the advertisement market will become a realm of chaos where the law of the jungle rules.

Since it is difficult for the advertising market to record growth as high as it did in the past, it is time to reflect on the existing fundamental management policy of KBS, the public broadcasting company.

If that is the case, there is no need to delay making KBS a public broadcaster and increasing television subscription fees drastically.

But if KBS finds it burdensome to operate many channels on just subscription fees, privatizing some of its channels should also be considered.

The barriers to entry into the newspaper market crumbled a long time ago. Needless to say, there is no way to build a new wall, either. However, entry into the broadcasting market can be controlled with policy decisions because these companies rely on radio waves.

If this fact is not taken into consideration, there is a chance that allowing the cross-ownership of newspapers and broadcasting companies will create confusion in the entire media market.

If the authorities do not present detailed calculations, nervousness about broadcasting policy will grow even more in the future.


*The writer is a professor of mass communication and journalism at Korea University.
Translation by the JoongAng Daily staff.