Are you ready for some football? Latest Madden title a 10

Are you ready for some football? Latest Madden title a 10 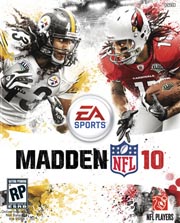 For sports fans, the start of the autumn season means two things: football and the release of the latest Madden NFL title.

With the football season in full swing, it’s now time for a review of the latest edition of the popular sports series.

Each year, the developers behind Madden traditionally introduce one big feature, such as quarterback vision or the big hit stick.

In this year’s edition of the Madden franchise, the defensive side of the ball seems to have received a significant upgrade. Other than that, you won’t notice any huge changes. But don’t be disappointed, as there are plenty of subtle upgrades to the latest title. Developers have stuck with what works best, making only slight tweaks and upgrades to enhance the gaming experience.

First, let’s get to the new feature. Those who aren’t merely into putting up points on the offensive side of the ball will like the new “Pro-Tak” system. The feature allows gamers to gang-tackle ball carriers. According to EA Sports, up to nine defensive players can get in on a play. The improved tackling system also allows defenders to pull ball carriers away from the sidelines. I like the new feature a lot. The little digital guys do not quit until the whistle blows.

Another new feature requires users to fight for the possession of fumbles. You basically have to press several buttons in order to gain control of a loose ball. While it’s good to have this opportunity - rather than leaving it up to random chance - it feels so much like button mashing. I like the attempt at adding a mini-game, but this feature needs a bit of work.

The running game has improved, while the passing element is a little trickier. The blocking seems better and the upgraded game play allows you to use bruising backs like Brandon Jacobs to pile ahead for extra yardage at the line of scrimmage.

As for the passing aspect of the game, a ratings system breaks down quarterbacks into short, intermediate and deep accuracy throwers, making it a bit trickier. I was never one to air it out much in Madden, but the latest edition had me using running back Darren McFadden a bit more than I would have liked. That’s the drawback in using the Raiders, I guess, as the fun in using McFadden and Michael Bush is offset by the woeful quarterback JaMarcus Russell.

As a college football fan, I became enamored with McFadden when he and Felix Jones were featured in the University of Arkansas’ wildhog formation. When the Miami Dolphins decided to make good use of Ronnie Brown and Ricky Williams in the wildcat formation, I was a bit surprised but happy to see some improvisational plays take place in the NFL. It is fast becoming a part of most teams’ offense.

Gamers will be happy to learn that the wildcat formation has been included in the latest edition of the Madden title. It’s different from the plays Madden fans have gotten used to over the years, but it’s fun. It’s also better to have a running back take a few snaps than a mediocre quarterback try to lead the offense.

There are several other additions as well. One other feature that I really like is the ability to decide whether injured players will sit on the bench or return to the game. When a player suffers minor injuries, you have the option of resting him to recover or playing him and risking further injury.

The verdict: The only drawback to this game that I can think of is the commentary of Cris Collinsworth, which is somewhat lame and repetitive. The game is fun to play, and the upgrades make Madden NFL 10 definitely worth the purchase. If you’re a football fan torn between buying Madden and NCAA 10, I’d say splurge and get both. After all, football season only comes around once a year.

Rating: ★★★★: Solid entertainment, especially for fans of the genre.