‘Sword’ presents the softer side of actress Soo-ae

‘Sword’ presents the softer side of actress Soo-ae 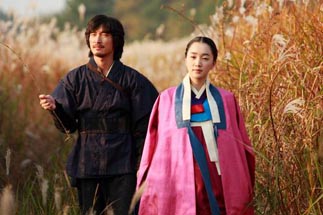 Cho Seung-woo, left, and Soo-ae in a scene from the film “The Sword with No Name.” Provided by the film’s official Web site

Now, you can add Empress Myeongseong to the list. 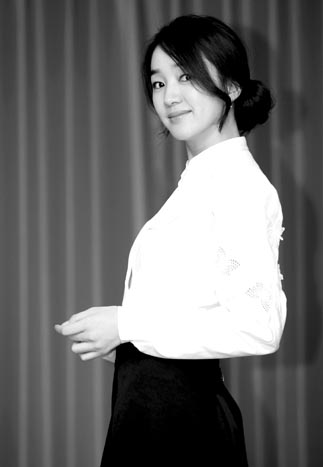 Soo-ae plays the heroin Queen Myeongseong in the film “The Sword with No Name.” By Lee Young-mok

The latest: actress Soo-ae, known throughout the country for her classical beauty. Soo-ae plays Empress Myeongseong in the recently released film “The Sword with No Name,” which is based on a book by Ya Seol-lok and was directed by Kim Yong-gyun.

The movie depicts a desperate romance between the empress and warrior Mu-myeong (Cho Seung-woo). The empress, a forward-thinking advocate of modernity, wields her political influence to further her ideals. But she is often at odds with her orthodox father-in-law, regent Daewon-gun (Chun Ho-jin), and meets a tragic death in her lover’s arms. The movie is loosely based on history, but there are clearly fictional elements, like when the warrior calls the empress by her first name, Ja-young.

The JoongAng Ilbo met Soo-ae on Sept. 22 at a hotel near Gwanghwamun to talk about her acting career and her most recent role.

“I’m so timid that I still feel awkward when people call me sexy,” said Soo-ae, whose elegant appearance at the interview exuded classical womanliness. “Whenever I do an interview, my head gets filled with my own personal weak points and I start talking about them. In the end, I worry about the fact that I didn’t talk much about the actual movie.”

Instead of following the lead of many modern female celebrities who present themselves as strong, assertive women, Soo-ae is much more traditional.

“I was so overwhelmed when I first received an offer to be in this movie because it is a role that represents a main character in Korean film,” she said. “Later on, I thought I was crazy to have accepted the proposal. I didn’t watch the previous films that featured the empress played by other actresses since this movie is more about a girl who is in love rather than a film focused on the historical facts. I only concentrated on her relationship with Mu-myeong.

“The director’s request was for me to show the face of a ‘woman.’ He said that he saw the ‘face’ on me twice in a previous movie I was in called ‘Sunny,’ and he told me that he wanted more of that face. I’m an introvert and timid, with a firm heart, and quite easygoing. I’m not quite what I seem. I personally think that I don’t fit in perfectly playing melodrama.”

Still, the actress added that she “believes” in melodramas.

“You have to trust and completely lean on your co-star. But as I said, I am too introverted that I can’t really speak my mind nor lean on my partner 100 percent,” she said. “Luckily this time I benefitted so much from my co-star Cho. I realized why he is considered a top star. Cho and I are the same age, so we became quite close during filming but kept talking in the honorific. Thanks to that, it was easier for me to fully absorb myself in the love aspect of my role.”

The hardest part, she said, was the climax of the movie, where the two main characters meet their fate. Soo-ae said she was exhausted after two straight days of filming. She also only had one, 10 million won ($8,500) costume covered in blood for the climax, which meant she had to nail the scene perfectly because there wasn’t any room for a reshoot. Fortunately, Soo-ae managed to shine through.

She spoke highly of her experience on the film Sunny, which she said allowed her to become a “real actress.”

“I didn’t understand anything about the atmosphere of filming, nor necessarily the meaning of teamwork before,” she said. “I was an actress who would go straight to her car and wait for the next scene. But I’m different now.”

Audiences first got to know Soo-ae through her debut movie “Family,” where she played a character that cursed a lot and was quite manly. In The Sword with No Name, however, viewers will get to see her elegant, graceful side. The fact that she can solidly portray these two extremes hints that Soo-ae has much more to offer.