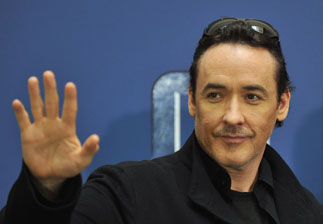 American actor John Cusack paid his first visit to Korea yesterday to promote the upcoming film “2012” as part of the “‘2012’ Footage Tour.” Director Roland Emmerich and other members of the cast and crew joined Cusack, who will tour a total of 10 countries including England, France, Australia and Japan for the event. Korea is their first stop in Asia.

The press conference, held at the COEX Megabox in Southern Seoul, included a special 53-minute screening of 2012, which opens worldwide on Nov. 12.

The film is based on the ancient Mayan prediction that a cataclysmic event will occur in the year 2012.

Cusack, whose previous films include “Being John Malkovich” (1999) and “High Fidelity” (2000), plays main man Jackson Curtis, a science fiction writer who struggles to survive as the world ends.