[TALK OF THE TOWN] Singers use art for advocacy

[TALK OF THE TOWN] Singers use art for advocacy 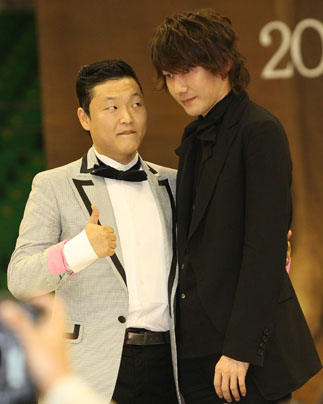 Songsters Kim Jang-hoon (right, in picture), 42, and Psy, 32, will be seeing a lot more of each other in coming months.

The two have teamed up to create a performance company and embark on a national tour, the singers announced at a press conference last Monday at the Olympic Park Gymnasium in southern Seoul.

The concert series, titled “2009-2010 Kim Jang-hoon and Psy’s One Touch,” will kick off on Nov. 20 in Daegu. From then through next February, the duo will perform 14 shows across 10 other major cities including Seoul, Busan, Daejeon and Gwangju.

One Touch will be the first major project for the singers’ joint company, but Kim says there are other tours and concerts in the works.

“We’re planning to hold a music festival on the east coast [of the peninsula],” he said. “The purpose is to let the world know that the East Sea is [under] Korea’s territorial jurisdiction.”

Kim is known for his work to promote the usage of “East Sea” in lieu of Sea of Japan and awareness of Korea’s rights to the Dokdo islets. He made headlines recently when he purchased advertisements in The New York Times, The Washington Post and The Wall Street Journal accusing the three papers of erroneously using Sea of Japan.

The twosome added they will be holding concerts to support VANK, the Voluntary Agency Network of Korea, a nongovernmental organization devoted to introducing and promoting the nation online.