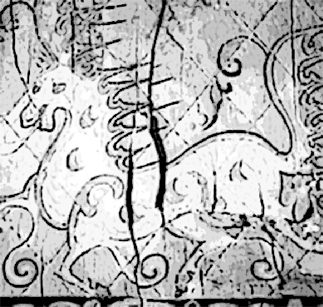 Since the phoenix in Chinese folklore is an imaginary bird, no one has ever seen its feather. Therefore, the feather of a Chinese phoenix is used to refer to something very precious. In East Asia, another imaginary beast is the qilin, which is thought to be based on a giraffe.

The qilin is used to refer to a rarely found talented person. The derivative qilin-a refers to a child prodigy. In praising two sons of his acquaintance, Dufu, a Tang Dynasty poet, wrote, “Since one is sent by Confucius and the other is sent by Buddha, both of you must be heaven-sent qilin-a.” I suppose the son of Dufu must have been jealous of such high praise.

A qilin, as described in ancient Chinese literature, has the body of a deer, tail of a cow, hooves and mane of a horse and horns on its forehead.

While today people associate the qilin with giraffes, ancient Chinese literature did not describe it as having a long neck.

The first giraffe that arrived in China from Africa was brought by the Ming Dynasty fleet. The fleet explored a sea route to Africa under the command of Admiral Zheng He and dedicated the giraffe to Emperor Yongle. The emperor, who was amazed to see such a mythical-looking animal for the first time, must have thought it was a spiritual being and called it a qilin, an imaginary beast.

A mural that was excavated from the tomb of the flying “Heavenly Horse” in Gyeongju in 1973 was opened to public viewing a few days ago. It is hard to see with the naked eye, but if you look at a photo taken of it with an infrared camera, it’s clear that the horse has horns. Therefore, some claim it is not a horse, but a qilin.

Whether it is a horse or a qilin, the value of the mural, a national treasure created by our ancestors in the era of the Silla Kingdom, will not change.

As there is a controversy, however, I hope the true identity of the mythical animal is clarified.

People in the old days believed that a qilin is not seen in ordinary days but appears when a benevolent lord comes to the throne and rules the country compassionately.

If the mural drawn by a Silla painter is a qilin, it must be a painting that was drawn with the hope of the appearance of a sage king. Even though 1,500 years have passed, the wish of the people is the same.