To market, to market

To market, to market 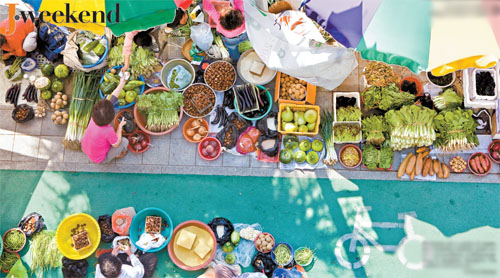 Merchants sell a variety of vegetables including radishes, green onions and pumpkins, at Bukpyeongjang in Donghae, Gangwon. The market is 200 years old. By Kwon Hyuk-jae


On one early morning market trip, we went to Jangheungjang, South Jeolla. As we entered, we were greeted by a dozen elderly women sitting in a row. Spread out before them were boxes of corn, baskets of sesame leaves, bowls of garlic, bouquets of Chinese bellflowers and bottles of perilla oil. We talked to one woman selling radishes who told us she was 74 years old.

“These are fine radishes,” she said. “I picked them from a garden by our house.”

She said she had come at 4 a.m. to find a nice spot where she could sit and sell her vegetables. She ran a hand over her cabbages in proud display, revealing the cuts on the backs of her hands, most likely from the harvest. jbiz91@joongang.co.kr

Bukpyeongjang dates back to the time of King Jeongjo (1752-1800), who ruled during the Joseon Dynasty (1392-1910). In those days, the Bukpyeong-dong area served as a transportation center, which also contributed to the growth of the market.

Today it is the biggest market in Gangwon. Three local roads - No. 7, No. 42 and No. 38 - meet in Bukpyeong-dong, Donghae, Gangwon, bringing merchants from the neighboring areas of Imgye, Jeongseon, Okgye and Tongil, and from as far away as North Gyeongsang and North Chungcheong provinces.

When we visited the market, it was full of dried seafood such as squid, codfish, walleye pollack, croaker, stingray and octopus. In the market’s crowded lanes, mountain vegetables and herbs shared space with medicinal remedies and farming equipment, blankets and kitchenware.

If shopping makes you hungry, a local speciality you might try is gukbap (rice boiled in soup), and there are several restaurants serving this dish throughout the market. Dukkeobijip, (033) 521-5283, sells gukbap for 6,000 won ($5.09). 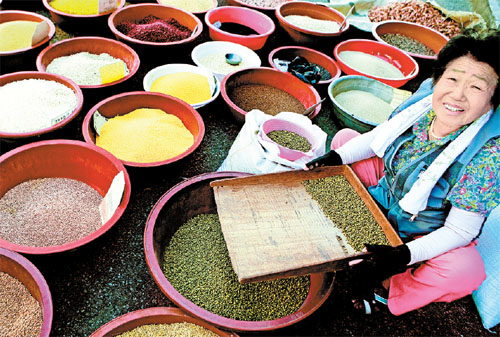 A woman sifts the stones out of grains and legumes at Bukpyeongjang in Gangwon.

Jangheung County in South Jeolla is known for its hanwoo, or Korean beef. The portion of grade-one beef produced in the county is 63.8 percent, which is higher than the national average of 55.9 percent. The quality of the beef is maintained through strict control of beef distribution channels.

Last year, 180 billion won ($101 million) worth of hanwoo was sold in Jangheung County, which was more than twice the sale of rice at 80 billion won. Beef prices in Jangheung are said to be 20 to 30 percent lower than the national average.

Jangheung Market is open on Saturdays, in addition to being open every five days like other o-il-jang. Jangheung’s beef market, with 13 shops and uniform prices, is open every day.

New at the market this year is the hanwoo beef jerky, which sells for 5,000 won a bag.

County Mayor Kim Chang-suk opened Seongnam Moranjang in 1962, naming it after Moranbong summit in his hometown of Pyongyang, North Korea.

Today, it is the biggest market in the country. Hundreds of tents managed by over 1,500 people regularly pack the market, where the crowds can number around 100,000 on weekdays and twice that on the weekends.

Folk performances by farmers’ bands regularly fill the market with lively music, making for a festive atmosphere on any day of the week.

The market carries a number of rare, hard-to-find items, such as centipedes, snapping turtles and snakes, which are used to make traditional medicines. There are also herbs and fruits from all around the country. 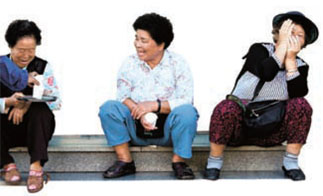 Opened in 1996, Jeongseonjang is known for the natural products picked from its deep mountain valleys. It started as a small barter market with a large variety of greens and herbs. It grew in popularity when Korail started offering travel packages to the region that include rides on a 7.2-kilometer-long (4.5-mile) handcar.

The county provides various services and events for tourists. Tour guides are present in every corner of the market and traditional music performances are frequently held in the market plaza.