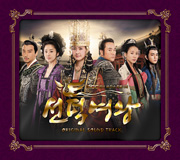 The soundtrack for the MBC drama “Queen Seondeok” is a high-profile release for several reasons. One of Korea’s best soundtrack producers, Lee Si-wu, took the helm of the project. Lee’s team was behind several masterful soundtracks such as “The Great White Tower.”

On top of that, several internationally renowned artists sing on the album.

They include Paul Potts, the British “popera” star; Hong Gwang-ho, who is playing Raoul in the Korean version of “Phantom of the Opera”; and Lee So-jung, who was the first Korean to star on Broadway.

You can expect songs in both Italian and English on this soundtrack for the Korean epic drama, which is set during the Silla Dynasty (57 B.C.-935 A.D.). If you are a regular viewer of the drama, listening to this album will provide an interesting journey through the plot of the show, starting with “Main Title” - which has dynamic and even feisty rhythms - and ending with “The Rising Empire,” a grand orchestral piece. Other memorable tracks include “Glass Song,” “Passo Dopo Passo” and “Wind Flower.”