Cleveland’s Choo proves to have 20-20 vision

Cleveland’s Choo proves to have 20-20 vision 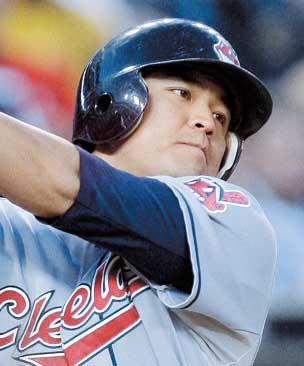 Choo Shin-soo of the Cleveland Indians reached the 20-20 mark (20 homers, 20 steals) in his second to last regular season game yesterday. Although 11 other batters achieved the feat this year, Choo became the first Asian in MLB history to do so.

Facing the Boston Red Sox at the Fenway Park in Boston, Choo hit a two-run home run in the top of the seventh inning. Trailing 10-4 and with Asdrubal Cabrera on first and no outs, Choo took an outside fastball from Paul Byrd and hit it over the “Green Monster.”

The right fielder had hit his 19th home run of the season five days earlier on Sept. 29 against the Chicago White Sox. Choo has 21 stolen bases in the season. The 27-year-old has now reached the 20-20 mark in his first full season with the Indians. He earned two hits in four at-bats to raise his season batting average to .300 and three RBI raises his season total to 86 for the season. He currently leads the team in RBI.

The Busan native signed a one year extension during the offseason and is expected to sign an extension with the Indians after the season.

While Choo reached his personal goal yesterday, the Indians lost the game 11-6. The club is now in danger of being swept to close out the season and even worst, the club is tied for last place in the American League Central with Kansas City Royals with the record of 65 wins and 96 losses. It is Cleveland’s worst record since 1991 when they finished the season with 57 wins and 105 losses.

The Red Sox got to the Cleveland starter Aaron Laffey early. The home team tagged him for seven runs in the second inning, including a grand slam by Victor Martinez. Laffey had a horrible game in which he gave up eight runs on seven hits, two walks, two home runs and a balk.

Cleveland, who had been struggling to put up runs of late had managed to tag Boston’s starting pitcher Josh Beckett for four runs in the first two innings.

The Indians have now lost a club-record 14 consecutive games on the road. Cleveland has also lost 26 of their last 34 games.