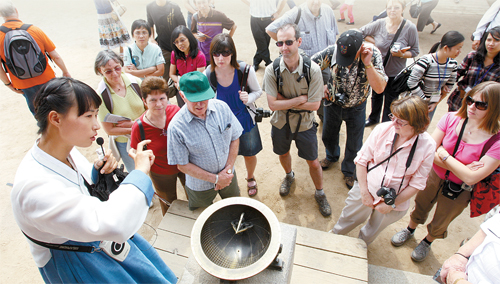 If you have been to Seoul, you have certainly been to one or more of the city’s five “grand palaces.” The complexes themselves are some of the city’s most majestic tourist attractions, while the vast green lawns within provide a tranquil backdrop for quiet contemplation away from the sounds of the city.

All five palaces are currently being renovated and each one has new programs designed to give visitors a fresh look at the structures and their history.

The palaces - Changdeok, Changgyeong, Deoksu, Gyeongbok and Gyeonghui - were all built during the Joseon Dynasty (1392-1910) and are all located in downtown Seoul.

The new programs are in line with the Lee Myung-bak administration’s current policy to restore the palaces to their original splendor and allow visitors to experience the Joseon Dynasty firsthand.

“The Lee administration’s policy regarding cultural properties is about more than restoration. The government is trying to help Korean people see the old palaces not just as dead relics, but as special places to experience the living culture and traditions of the Joseon Dynasty,” Ham Young-jun, the presidential secretary for culture, sports and tourism, said. “The policy also aims to upgrade the palaces to pieces of cultural heritage worthy of worldwide recognition.”

To do this, the palaces are increasing the number of exhibits that depict daily life on their grounds.

“We found that one of the things that visitors are most curious to know is how kings and queens lived in the palace,” Kim Jae-shin, a tour guide at Gyeongbok Palace, said.

Gyeongbok Palace, for example, is planning to restore a royal kitchen. When complete, it will be similar to the one featured in the popular TV drama “Jewel in the Palace (Daejanggeum).”

In a secluded area of the northernmost part of Gyeongbok Palace sits Geonchong Palace, a palace within a palace built in 1873, the 10th year of the reign of King Gojong (1852-1919). It consists of three buildings - Jangandang and Gonnyeonghap, which were the residences of King Gojong and his wife, Empress Myeongseong, respectively, and Gwanmungak, the king’s study.

The palace’s remote location away from the main palace buildings provided the perfect cover for the murder of Empress Myeongseong by Japanese assassins in 1895.

The palace was torn down just before Korea came under Japanese rule in 1910. It was restored in 2007, when it began receiving a limited number of visitors. This year, it was opened to the general public. From July to October, a traditional tea ceremony was held in Jangandang every first Saturday of the month, giving visitors a direct experience of palace life. 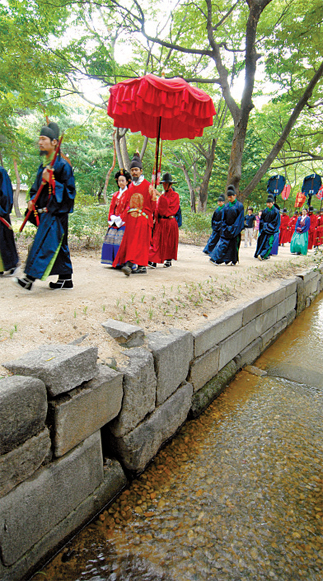 Geumcheon, a stream separating the palace from the outside, at Changgyeong Palace was restored in August in a bid to show visitors the original look of the palace.

“The event was particularly popular with foreign tourists,” Park Jong-gap, the director of the Gyeongbokgung Office, said.

Changdeok Palace is the site of another palace within a palace. The secondary palace, which originally housed an herb shop, was the de facto medical institution for the royal families of the Joseon Dynasty. It was recently restored and there are plans to open it to the public later this year.

“We are considering special programs in cooperation with the Association of Korean Oriental Medicine, such as public acupuncture demonstrations and providing samples of herbal concoctions,” An Jeong-yeol, the director of the Changdeokgung Office, said.

Changdeok Palace also plans to launch a new tourist program this year to recreate the hoegang, which was a special class for Joseon Dynasty princes. The hoegang consisted of a question-and-answer session between the prince and the king with a number of government ministers, including the prince’s tutor, present.

“We will hold the hoegang twice a day with about 30 people recreating the scene. To help us, we will consult the Annals of the Joseon Dynasty [detailed records of national affairs and information about culture and daily life] and other relevant historic records,” said an official with the Cultural Heritage Administration.

The most visible events at the palaces are the regular re-enactments of the royal changing of the guard. The ceremony, which is held several times throughout the day at Gyeongbok and Deoksu palaces, features guards dressed in colorful traditional garb and carrying traditional weaponry.

Gyeongbok Palace also plays host to a daily re-creation of a morning meeting called the sangchamui, at which ministers would report the affairs of state to the king.

In June, 40 royal tombs from the Joseon Dynasty were granted World Heritage status by Unesco. In recognition of this honor, five walking tours to historical sites in the Seoul area will be offered. The tours are led by guides who provide information about the history behind the sites on the tour.

The second tells the story of how Hanyang, the previous name for Seoul, came to be the Joseon capital. It moves from Changdeok Palace to Heonneung, Jeongneung and Gwangtonggyo. 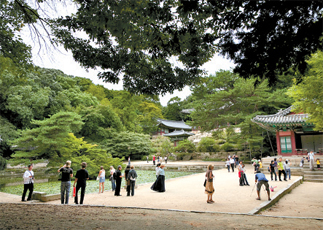 The third traces the life of the Joseon kings. It begins at Changgyeong Palace and goes to Seolleung and Jongmyo, the shrine for deceased kings and their ancestors.

The fourth describes the tradition of filial piety observed during the Joseon Dynasty. It starts at Changdeok Palace, moves to Yunggeonneung (the tomb of King Jeongjo and his father Jangjo, who is also known as “Sadoseja”) and ends at Yongju Temple.

The fifth focuses on the short-lived Korean Empire (1897-1910) and includes Deoksu Palace and Hongyureung. Hongyureung is the tomb of King Gojong and King Sunjong, the two kings who led the empire.

The Cultural Heritage Administration has plans to offer a combined tour of Changdeok Palace and Changgyeong Palace, which are located next to one another. In the Joseon Dynasty, the two palaces were actually considered as one, so it is natural for a tour to include both. The Cultural Heritage Administration hopes this will be more convenient for visitors.

If the plan proceeds next year as planned, the entrance to Changdeok Palace, including Injeongjeon, will be left open to the public, with limited access to the rear garden. Hamyang Gate between the two palaces will facilitate access from one palace to the other.

Changdeok Palace is the only palace among the five that limits access to its grounds. Visitors must be accompanied by a tour guide, except on Thursdays when people are allowed to tour the palace on their own after paying an admission fee of 15,000 ($12.78) won.

The Cultural Heritage Administration also has plans to offer an integrated 10,000-won admission ticket to all five Joseon palaces (the combined Changdeok-Changgyeong, Gyeongbok, Deoksu and Gyeonghui) and Jongmyo shrine.

“We will introduce the integrated admission system soon,” said Cho Hyun-joong, the director of the Heritage Promotion Policy Division at the Cultural Heritage Administration.