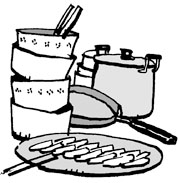 Despite what you may think about former Korean President Chun Doo Hwan, there is at least one thing Korean households have to thank him for: the rice cooker.

According to the book “Lucky Seoul, Bravo Korea” by Sohn Seong-jin, a group of Korean wives made headlines in 1983 after they visited Japan and came back with Japanese-made electric rice cookers. Although there was a barrage of criticism against them, rather than diminish the housewives, the then-president scolded the officials under him, saying, “You are fools that do not know how to produce rice cookers.”

The president gave a strict order: “Don’t you dare eat rice if you fail to have rice cookers made in Korea within six months.” The officials invited over home appliance experts and started to develop good quality Korean rice cookers.

Thus, the electric rice cooker - which, just by adding rice and water, automatically cooks rice without worry of overflow - was popularized. Of course, housewives appreciated the appliance very much.

The washing machine is another appliance that drastically reduced household chores. The hard work of washing, wringing out water and drying clothes is all done if you press a button a few times. How convenient! It is natural, therefore, that the Vatican praised it as a tool that helped contribute to the liberation of women.

The birth of such convenient electrical appliances is closely related to women’s advancement into society. When women, who worked in place of males during World War I and II, advanced into society as regular industrial workers, it became necessary to reduce the burden of household labor. Since then, the amount of household labor women do at home has decreased drastically. American women in 1976 spent an average of 26 hours per week keeping house; today, that’s reduced to about 17 hours.

The problem is that the gap between men and women is still wide. According to a 2007 survey conducted by George Mason University in the U.S., in eight countries in the Americas and Europe the proportionate share of household labor between women and men was 7:3.

The gap is much wider in Korea. According to a survey conducted by Korea’s National Statistical Office in 2005, men here only spend about 46 minutes on household chores daily, about one-fifth of the four hours and nine minutes of work local women put in. On the other hand, men in the U.S. and Germany spend about 90 minutes more on chores than their Korean counterparts, according to the same survey.

The so-called “holiday syndrome” is a disease caused by the reality mentioned above. During the holidays, a wife has to work hard to prepare food for ancestor memorial services, while her husband idles away watching television. This would make any woman feel gloomy, especially if she also has a job outside of the home. Perhaps that is the reason there is now food for these kinds of occasions that can be ordered on the Internet - which isn’t to say that’s a bad thing.

After finishing preparations for ancestor memorial service food with one click on the Internet, how about spending that saved time on making the love between a husband and wife grow even stronger? As long as couples produce some more descendants, ancestors won’t mind the ready-made food as much.