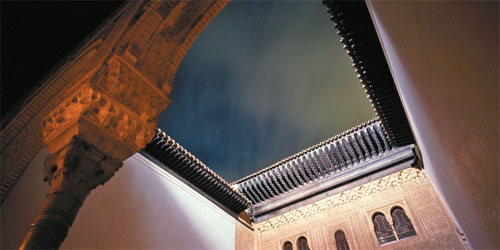 From a mystic pine forest to a sea covered with morning haze, the images captured in photographs taken by Korean photographer Bae Bien-u, 59, are subtle yet captivating at the same time.

His pine forest shots in particular seem so surreal and dreamlike that you can’t help but take a closer look to make sure they are actually photographs.

Bae’s works often use the effects of light to the fullest. The details in many of his photos are blurry, and there’s often a strong contrast between light and dark shades.

The National Museum of Contemporary Art in Deoksu Palace, which is located in central Seoul, is currently hosting Bae’s solo exhibition, which continues through Dec. 6. It presents a rare opportunity to see his pine forest series as well as his recent works that depict Changdeok Palace in Seoul and Alhambra Palace in Granada, Spain.

Bae, who grew up in Yeosu, South Jeolla, studied art in college but later fell in love with photography. He made a name for himself taking pictures of nature, particularly pine forests, in the 1990s. In 2007, two photos from his “Pine Tree” series fetched a combined 100 million won ($85,106) at a Christie’s auction. The black-and-white photos of the foggy pine forest in Gyeongju resemble traditional Korean ink paintings.

“The pine forest makes me feel alive and stimulated,” Bae was quoted as saying by the JoongAng Ilbo recently. “Our ancestors treated pine trees like people. Pine trees planted near the royal tombs were for worship.

“When I go into a pine forest in the early morning, I can feel the high spirit. I feel happy to be there when the sun rises and the light shines through the trees.”

Bae’s pine series received worldwide recognition in the mid-2000s, and British pop star Elton John even bought one photo in the series for 30 million won.

In 2006, Bae became the first Asian photographer to hold a solo exhibition at the Thyssen-Bornemisza Museum in Madrid, Spain.

Later, he was commissioned by the Spanish cultural authority to produce a series of photographs of Alhambra Palace. It took two years to complete the series.

The beauty of the Islamic-style palace is portrayed in his works that emphasize the contrast between light and dark. Muslims, who ruled Spain for a time in the Middle Ages, tried to replicate heaven in their homes, and Alhambra is a great example of these attempts. Bae took pictures of the old buildings as well as gardens that contain numerous fountains, ponds and waterways.