Women are finding new life after 50

Women are finding new life after 50 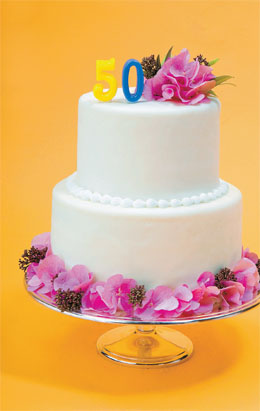 For many people, particularly women, celebrating a 50th birthday triggers a lot of strong emotions. Chances are the gray hair, deep wrinkles and weak knees that come with taking that first step into the golden years only add an extra dose of anxiety.

At this point, you may be thinking: “What does a 50-something-year-old woman and what she goes through have to do with me?”

Think again. Women make up half of the world’s population, so it is likely that you will someday have, if you don’t already, such a lady in your life. Their experiences are likely to have an effect on you as well.

With that in mind, a group of female reporters in their 30s and 40s from this newspaper formed a special reporting team to investigate the subject. We interviewed women in their 50s in various fields, delved into studies about this group of people and met with experts in the field, hoping to discover what this special age and gender group means to the people around them, to our society and to the world.

During our investigation, we were surprised to discover how few studies or discussions there have been on this topic in Korea, compared to other countries such as the United States.

In 1997, Time magazine made a cover story of Hillary Clinton’s turning 50, and used it as a way to look at the life of other female baby boomers in the U.S.

There have also been some fierce open debates surrounding celebrities like Madonna, Michelle Pfeiffer and Sharon Stone, who are also in the over-50 age group. Much of the controversy has revolved around whether their “timeless” beauty has come about through cosmetic treatments like Botox and whether the use of such artificial procedures should even be denounced at all.

This April, Suzanne Braun Levine, a recognized authority on women’s and family issues in the U.S., published a book called “Fifty is the New Fifty,” which advises women 50 and older to embrace their age and continue living creative, productive lives.

There are also many Web sites such as www.fiftyisthenewforty.net, www.fiftyandfurthermore.com that further encourage women to enjoy the age to the fullest.

“These days, women in their 50s seem like they are more bulhok than jicheonmyeong,” said Kim Ho-ki, a sociology professor at Yonsei University. The reason, Kim says, is because women are living longer.

“Taking into account that women these days live well into their 80s on average, being in one’s 50s is just 30 years from the turbulent and vulnerable 20s, with 30 more years of living to go,” he said.

According to the CIA World Factbook, the life expectancy of Korean women is 82 years, as of 2009.

Kim also says that today’s 50-something Korean women are a special group of people.

“They were born at the start of country’s massive industrialization movement. They lived their 20s and 30s amidst pro-democracy rallies. They also experienced the Asian financial crisis in their 40s. And now they are finding themselves at the turn of the millennium,” says Kim.

Kim refers to them as the “in-between generation” in that they are expected to pay their respects and take care of their parents, who are considered the older generation, while at the same time connecting with their children, considered the new generation.

A lot of the women we interviewed for this article confessed to experiencing physical changes stemming from menopause. Dimmer vision, flabby skin and short memories were just a few of the changes described by our interviewees.

“I realized I kept telling my employees things I’d told them before,” said Go Yeong-hui, secretary general of Global Care, an NGO. “When I find myself doing that, I feel old.”

Choi Tae-ji, artistic director of the Korea National Ballet, reported, “I’m very conscious of my body, even more than my face, because of my profession. I get massages and physical therapy whenever I can.”

Kim Hye-kyeong, a fashion design professor at Dongduk Women’s University, said that when she turns 50 next year, she would like to be as passionate as she was in her 30s and 40s.

But a majority of our interviewees also said they feel a sense of freedom and compassion that they didn’t when they were in their 20s, when they were focused on finding who they were or proving themselves to others.

“I feel like I’m not bound to anything and can face myself just as I am,” said Kim Jin-hyeong, a planning commissioner at Yonhap News Agency.

Eunice Kim, vice president of Hana Financial Group, said, “Before I was busy judging others. Now I feel like there isn’t anybody I cannot understand.”

According to recent statistics, women in their 50s in Korea make up 6.4 percent of the country’s total population. This is an increase from 2.9 percent 40 years ago.

So how can this portion of our population stop worrying and begin to enjoy their lives?

Gwak Geum-ju, a psychology professor at Seoul National University, has a simple, yet hard-to-follow, piece of advice: “Forget about your age.”

If that’s too hard, she suggests trying a new way of calculating age.

“With life expectancy increasing, one should multiply one’s age by 0.7. For instance, if you are 50 years old, you’re really 35 years old in today’s world.”

Gwak wasn’t always such an expert on the 50-something set. She used to specialize in research on people in their 20s, and taught a course called “Shaky 20” based on her research. However, people around her told her that what Korea really needed was a class called “Shaky 50,” saying that there was not enough research done on that age group in Korea, in comparison to the emotional whirlwind they go through. This prompted her to do research on that group as well.

To enjoy 50, Gwak suggests creating something called the “positive illusion.”

“When you are young, you fantasize about such things as meeting your Prince Charming or becoming rich and famous. Losing those fantasies makes you feel older, so no matter how silly it may sound, it is important to keep dreaming,” she said.

From left: Actress Audrey Hepburn, U.S. Secretary of State Hillary Clinton, Korean star travel writer Han Bi-ya and singer Patty Kim were some of the role models picked by the people we interviewed for this article. JoongAng Ilbo]

She also says that Korea’s happiness index is particularly low compared to other countries, in part because Koreans tend to be overly conscious of what others think.

“In your 50s, you can really be free and break out of your shell. Don’t think about what so and so thinks, whether it’s your husband’s friends, your children’s teachers or members of the PTA. Use the time to really do what you like,” Gwak says.

After all, Nick Bostrom, the director of the Future of Humanity Institute at Oxford University, said it’s not important how much time has passed since you were born, but where you are in life and what you think you can and want to do.