An orphan struggles to overcome abandonment

An orphan struggles to overcome abandonment 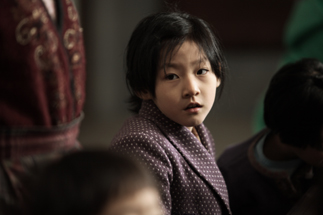 
Jin-hee’s morning begins on a bicycle, her arms wrapped around her father’s waist as he navigates the streets. She enjoys the ride and the warmth of his back as she presses into him.

It’s a big day. Her father bought her new clothes, which she is now wearing. He also bought her a large cake, though it’s not her birthday. She is so happy that, during lunch at a restaurant, she sings a little song for her father.

The day, however, takes an abrupt turn. Jin-hee’s father drops her off at an orphanage, where she’s left with a dozen children she has never met. It’s the beginning of a brand new life for her, one she tries desperately to escape until she realizes that there is nowhere for her to go and that her father is not coming back.

She quickly learns that life at the orphanage is full of separation and sadness, as other children are adopted and leave her life, one by one. Her best friend Sook-hee (Park Do-yeon) lands in the arms of an American family and is whisked to a land where she apparently can eat cake every day. Although Jin-hee eventually gives up on the idea of going back home, she can’t shake the memory of that bike ride and the warmth of her father’s back.

The French-Korean film “A Brand New Life,” which will be screened at PIFF under the World Cinema category, narrates a heartbreaking story about overcoming the sorrow of separation and accepting fate. The film beautifully illustrates the process that Jin-hee (Kim Sae-ron) goes through as she slowly realizes her fate and then learns to embrace life as an adoptee. Every moment is tear-jerking, but at the same time it gives you hope that one can find a new path.

The film is based on the true story of Korean-French director Ounie Lecomte, who was born in Seoul, Korea, in 1966 and was adopted by a French family when she was 9. She spent one year at the Saint Paul orphanage, run by Catholic nuns, in Seoul. It is the first French-Korean joint production and is Lecomte’s debut film. It was co-produced by renowned director Lee Chang-dong and was filmed near Seoul. It was presented for the first time at the Cannes International Film Festival in May.

Lecomte said in an interview at the Cannes festival that she tried to portray the emotions of a little girl facing extraordinary circumstances - abandonment and adoption - rather than simply replicate her childhood. “The year at the orphanage is the time and place of an intervening period between two lives: a life in which she didn’t have to learn how to let go and then a life in which she will learn how to desire,” Lecomte said.