Welcome to a drab, dystopian future

Welcome to a drab, dystopian future 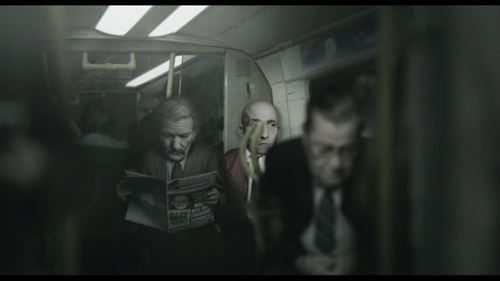 Riding a trans-European subway, Roger (Vincent Gallo), center, struggles with the voice inside his head in the Swedish animated feature “Metropia,” which will be screened at PIFF. Provided by the Pusan International Film Festival

Indeed, what could be better than science fiction and infrastructure? Not much, right? Unfortunately, Metropia isn’t quite Terry Gilliam’s epic “Brazil.”

Metropia takes place a mere 15 years or so in the future, in a dimly lit Europe inhabited by similarly glum residents, all of whom speak impeccable English - it is Europe, after all. Perhaps they must, because cities in this Europe are connected by a super-rapid subway system, and the main character, Roger, finds himself traveling from his home in Stockholm to distant places such as Paris, Copenhagen and Stalingrad all in the course of a day. (If you’re wondering about Stalingrad, this city is currently known as Volgograd, and it’s in southwestern Russia, about 320 kilometers, or 200 miles, east of Ukraine. It’s not exactly difficult to figure out what the filmmakers are alluding to here.)

Roger - voiced by the actor/writer/director/hipster Vincent Gallo - is an overworked drone who lives with his unsatisfied girlfriend in a tiny apartment. While in the shower, he often fantasizes about the blonde beauty in the shampoo bottle’s logo. But bound for work on the subway one day, he sees her. At least, he thinks it’s her. While the voice in his head tells him that he’s got a girlfriend and a job he’ll be late for, Roger follows his dream girl anyway.

But dream girl (voiced by Juliette Lewis) confronts him, and it turns out there’s a lot more to her than a pretty head of hair. As he continues to follow her, he’s taken deep into a world of corporate avarice, voyeurism and mind control.

Metropia certainly has things to say about how connected we’ve become and just how easily millions of people are willing to share personal information on Facebook and Twitter. It just says them in ways that are sometimes plodding and dull - but then again, the point of this film isn’t to be uplifting or exciting.

Likewise, the computer animated world is gray and depressing, probably just what the director - Tarik Saleh, a former graffiti artist from Sweden - wanted to convey. While the animation doesn’t stand up to some of Pixar’s recent fare, there are aspects of it that are worth mentioning. The characters’ facial features and expressions are shockingly lifelike, so much so that at first I wondered if I was indeed watching an animated movie.

But I reconciled this issue after taking into account that the characters have infant-size eyeballs, heads too large for their bodies and some rather rigid locomotion. I still have to wonder if the filmmakers had somehow injected image data or motion capture technology into each characters’ visage. The eyes were particularly striking and have stayed with me.

In the end, it’s a mildly thought-provoking reminder of what might happen the more cavalier we are about giving up personal information to the unknown. Not a stunning endorsement, but not a recommendation against, either.


The film will be shown at 11 a.m. on Friday and Saturday at Lotte Cinema Centum City and at 5 p.m. on Oct. 14 at Cinus Busan Theater.