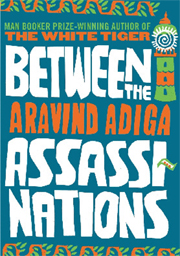 When I first traveled to India four years ago, I was struck by two things: the country’s overwhelming poverty and the diversity of its people.

Booker-prize winning author Aravind Adiga tackles both these issues in his new book “Between the Assassinations.”

No stranger to controversial topics, Adiga introduced readers to India’s battle between the wealthy and poor in his debut novel, “The White Tiger.” In “Assassinations,” his second novel, Adiga focuses on 14 people living in the city of Kittur on India’s southwestern coast. The book is set up as a faux travel guide, with a new character introduced at each city landmark.

Most of the characters here are what you might call the entrepreneurial poor - those forced to either serve the rich or mislead their fellow indigents to survive. In this nebulous caste that crosses all religions, even family members cannot be trusted.

Take the little boy from the countryside, Keshava, who is sent to Kittur to work at the grocery store of a distant relative. When his relative rejects him, Keshava falls in step with Brother, a fat man reminiscent of Charles Dickens’ Fagin. Under Brother’s care, Keshava quickly achieves his dream of becoming a bus conductor, the bus line being one of Brother’s many concerns. But that dream just as quickly dissolves, leaving him alone amid the dust kicked up by the bus as it pulls away.

In Kittur, it seems that everyone has some type of misery. And that includes the rich and higher caste members in the town. Early in the book, a wealthy boy sets off a bomb at the local Christian high school. The bomb is his revenge for a lifetime of being equally pitied and admired for having a lower caste mother and a Brahmin father. At home, he practices his confession to the police: “I have burst a bomb to end the five-thousand-year-old caste system that still operates in our country. I have burst a bomb to show that no man should be judged, as I have been, merely by the accident of his birth.”

Noble sentiments, especially from someone who has a full-time chauffer and can afford to gulp down three chikoo milk shakes (with double ice cream) in one sitting.

But this is the beauty of what Adiga accomplishes with Assassinations. He has painted a town with relentless and honest detail. He introduces the reader to the widows, the Communists, the dying, the sugar-pill hawkers and the would-be terrorists of Kittur - a kaleidoscope of characters rich in contradictions and desires.

Alas, the novel’s greatest gift has major tradeoffs. Characters and description rule the book, and no plot connects the chapters in a unifying movement.

In the overwhelming despair Adiga throws at the reader, chapter after chapter, it is difficult to connect with a character for more than a moment before being introduced to the next life in crisis. Perhaps this makes the book truer to life, a more accurate mosaic of one Indian town. But does such a pixilated, plotless look at the unhappiness of a dozen souls really make for a good novel?

When I was in India, I spent many an afternoon in my friend’s garden, talking with her father about the presence of the country in Western literature. He argued that no author has properly devoted themselves to the stories of India since Rudyard Kipling and E.M. Forster.

Despite Assassinations’ faults, Adiga has gone beyond Kipling and Forster’s romp through colonial India. He has given English readers a unique glimpse into modern India’s turbulent machinery from the perspective of a local.

With Adiga’s second book, I think it’s safe to say the tides of Western literature’s understanding of India are turning.