In search of authentic pasta, pizza

In search of authentic pasta, pizza 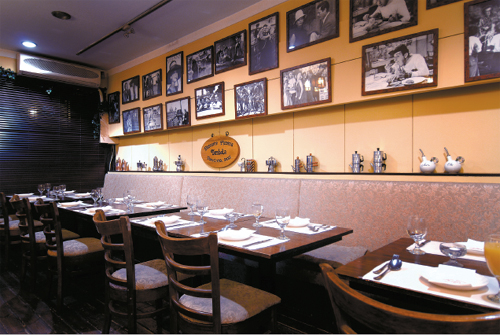 A dish served at A. Voce

People who travel to other countries often return home pining for the same dishes and flavors they savored abroad.

That’s especially true for visitors who trek to Italy, which offers up some of the most popular and widespread cuisine in the world. Think about it: Where can’t you get a slice of pizza, after all?

As more Koreans venture to Italy for vacations, it goes without saying that an increasing number are developing a hankering for Italian food as well.

“Many Koreans are now visiting Italy, and when they come back to Korea they have a much better understanding of the Mediterranean diet,” said Rudolfo Patella, the owner of the Italian restaurant Antonio in Cheongdam-dong, southern Seoul.

In fact, Italian food is in some ways similar to Korean cuisine. Dishes from southern Italy are quite spicy, which is also a trait of Korean food, and people from both countries love seafood.

For those looking to get a taste of Tuscany or other regions of Italy, Seoul offers a healthy dose of quality restaurants serving up authentic Italian cuisine.

The Seoul Office of the Italian Trade Commission and the Monthly Bar and Dining magazine recently published the third edition of the “Guide & Directory of the Italian Restaurants in Seoul,” updated for 2009. The directory lists 219 restaurants serving Italian fare, grouped into several categories such as “fusion,” “international,” “original” and “franchise,” among others. It is now on sale at major bookstores in Seoul for 9,000 won ($7.70) - the first time it has been offered to the public. The previous editions were created solely for commercial purposes, but numerous people started asking for the guidebook, so the trade commission decided to make it available to a broader audience.

The eateries were selected based on a survey that asked restaurant owners whether they incorporate original Italian recipes and use food items from Italy in their dishes. The survey also asked whether the chefs are Italian or were trained in Italy.

The latest edition of the guide shows that Italian food is indeed alive and well in Korea.

A chef visiting a table at La Cucina; inside the restaurant Tombola; A chef preparing a dish at Tutti Matti. Provide by Monthly Bar and Dining magazine

The following are some restaurants that the guidebook groups in the “original” category.

This restaurant in Seocho-dong, Seocho District, uses a bevy of ingredients - from vegetables to prosciutto to different kinds of cheeses - to create homemade dishes that bring out the full flavors of Italy. Aimo e Nadia has built a solid reputation for its various types of noodle entrees, particularly its spicy escargot pasta made with spinach linguini and Italian Gorgonzola, a uniquely flavored, rich cheese.

The restaurant’s interior is tranquil and relaxing, decorated in a garden motif complete with trees, rocks, European-style accessories and floral arrangements. As a testament to its quality and ambiance, Aimo e Nadia is also popular as a venue for weddings. (02) 523-6588

Editor’s Tip: The terrace is open from April to the end of October; reservations are a must for dinner.

Alla Torre, which means “from the tower” in Italian, offers up a casual, homely atmosphere near Hongik University in Mapo District.

In the morning, the restaurant’s staff kneads pasta dough for dishes later in the day. Alla Torre is also known for its fresh seafood and high-quality meat, which bring out the flavor of the natural ingredients used in the dishes. The tenderloin steak with chocolate sauce and the casarecce - a plate of tri-colored pasta made from egg yolk, spinach and tomatoes and tossed with shrimp and a white wine sauce - are the highlights of the menu. Entrees run from 16,000 won to 38,000 won. It also offers lunch and dinner sets.

Antonio in Cheongdam-dong, Gangnam District is run by an Italian owner who is also the restaurant’s chef. A beautiful grand piano stands in a corner inside, where duet performances are held in the evenings from Thursday to Saturday. Recommended dishes here include the Korean beef steak, foie gras, truffles on toast and squid ink pasta. The restaurant has over 180 different kinds of Italian wine. Pizza and pasta dishes run from 18,000 won to 35,000 won. (02) 3443-4333 or www.antonios.kr

Editor’s Tip: Keep an eye out for new dishes introduced each month.

Located in a residential area in Yeoksam-dong, Gangnam District, A. Voce is as comfortable as your own home. Its chef, Lee Pan-jo, gets rave reviews from customers by adding his own pizazz and originality to Piemonte-style dishes and cuisine from other regions of Italy. He places extra care in selecting ingredients, as they are what make his Italian dishes so tasty. 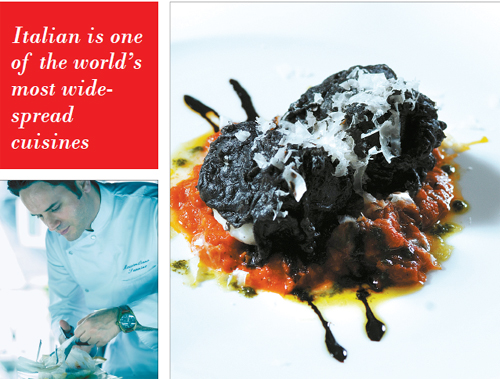 Inside the restaurant Tutti Matti.

To guarantee freshness, Lee buys his vegetables and fish domestically while he imports his pasta, olive oil, cheese and prosciutto directly from Italy.

Editor’s Tip: A. Voce’s tiramisu does not contain gelatin, as many versions of this popular treat do, to maintain its original flavors.

This restaurant in Sinsa-dong, Gangnam District, presents the taste and style of Piemonte, Italy. Almost 60 percent of the menu is reorganized twice a year, as are the paintings hanging on the walls. A new dish featuring tuna with black sesame and the tenderloin steak with green pepper sauce have already become quite popular. Roughly 200 kinds of wine are offered, more than 50 percent of which are Italian. One can also find here moderately priced, directly imported premium wines. Pasta and main dishes run from 23,000 won to 35,000 won. (02) 543-8373 or www.buonasera.co.kr

Editor’s Tip: There is a private room for small gatherings and a banquet room which can accommodate 24 people.

CasAntonio recently opened in Itaewon, Yongsan District, and is run by Antonio Patella, a pianist who came to Korea and then worked in the domestic dining industry for about 10 years. The restaurant adheres to a strict rule of using Italian ingredients and products - except for agricultural items and seafood. A highlight here is the homemade pasta cooked with freshly kneaded pasta. CasAntonio also offers a wide selection of beverages, including about 500 different kinds of Italian wines as well as Italian sparkling water. The beverage list, in fact, takes up an entire side of the menu.

Editor’s Tip: The restaurant has a “Today’s Special” menu aimed at those who are not familiar with Italian cuisine or cannot decide on what to eat. The menu varies according to whatever ingredients are available that day.

La Cucina in Itaewon, Yongsan District, is perhaps one of the most famous Italian restaurants in Seoul. The restaurant launched in February 1999 and hasn’t looked back since, opening up a new chapter in Korea’s cuisine scene at a time when traditional Italian food was not familiar to Koreans. La Cucina, which means “the kitchen” in Italian, satisfies palates with its five-part menu, carefully chosen by the chefs under the supervision of chef Kim Hyeon-cheol. Beef tenderloin steak with wine sauce and the grilled lamb chop are among the restaurant’s top offerings, as are the chef’s recommendations. Various kinds of spaghetti and lasagna are also popular. Pasta and main dishes run from 21,000 won to 55,000 won. (02) 794-6005~6 or www.la-cucina.co.kr 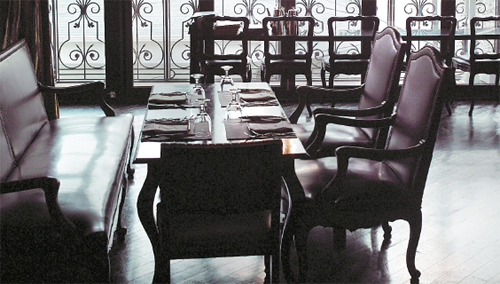 A main dish served at CasAntonio.

Editor’s Tip: Enlist the help of the sommelier to help you choose the perfect wine for your meal. You’ll likely need the assistance, as there are more than 700 wines available.

Ristorante Eo in Cheongdam-dong, Gangnam District, is a tiny Italian boutique restaurant with just four tables. The menu has only three set menus - one offered at lunch and two at dinner. The offerings can change daily, depending on what ingredients chef Eo Yoon-gweon decides to purchase in the morning at the market.

Ristorante Eo uses high-quality products such as lobster and caviar and aims to capture the natural flavors of the dishes, using only salt, pepper and spices. Those who want to eat here must make a reservation at least one week ahead of time for dinner and two weeks for lunch. The lunch set menu runs 33,000 won, while the dinner set menu ranges from 66,000 won to 88,000 won. (02) 3445-1926

Santino Sortino, a former head cook of a big-name hotel, put his reputation on the line and opened his own restaurant in Itaewon, Yongsan District, in 2006. Sortino’s pizza quickly gained a following for its size and taste, particularly the thin-crust rustica pizza -with buffalo mozzarella cheese, rucola and Italian ham. Many of the dishes at Sortino’s hail from southern Italy, though some also can be classified as fusion. The Sortino pasta with tomato and cream sauce, a dish named after the chef himself, and the roasted swordfish steak are popular among visitors. The roasted swordfish steak is made by broiling the meat on a grill and then garnishing it with lemon dressing and capers. Pasta, pizza and main dishes run from 16,000 won to 70,000 won. (02) 797-0488

Editor’s Tip: Ask for the truffle pasta - which incorporates white truffle oil and is not on the menu.

Tombola, located in Seorae Village, Seocho District, became popular with foreigners living in the neighborhood for its pasta and pizza.

The owner opened the restaurant to introduce Italian tastes and flavors to Korea. The Italian stove pizza is a signature item on the menu. With its thin crust, ample cheese and various toppings, this offering has become quite popular among expats. The rucola pizza is another favorite. The restaurant has very limited space. Pasta and main dishes run from 13,500 won to 42,000 won. Tombola also offers set menus for both lunch and dinner. (02) 593-4660 or www.tombola.co.kr 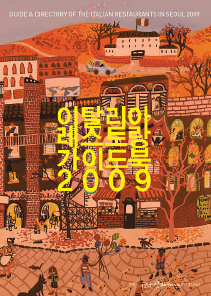 The name of this restaurant in Sinsa-dong, Gangnam District, means “everybody is crazy” in Italian, a reference to the fact that the owners hope everyone who visits falls madly in love with the food.

Tutti Matti was started by two Italian and an Australian who met in Korea and decided to open a new restaurant.

The ambiance is free and lively. Massimiliano Sannino, the owner-chef of the restaurant, hails from Naples, Italy and infuses his creations with ingredients from his native land, including olive oil, black olives and capers. Pasta starts at 17,000 won; the lunch set starts at 23,000 won and the dinner set runs 55,000 won. (02) 511-0334

Editor’s Tip: From Wednesday through Saturday nights, there is a D.J. at the lounge bar on the basement floor.