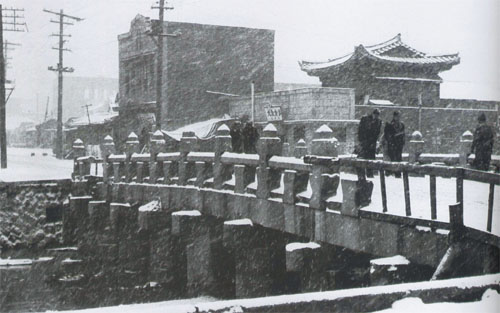 A rare photo of Supyo Bridge during the Korean War (1950-1953) taken by a war corespondent in 1952. Provided by Myongji University-LG Yeonam Library

Seoul city, albeit small, has many mountains. Most notable are what are known as the “four inner mountains” - namely, Bugak, Naksan, Namsan and Inwang. Then there are the “four outer mountains” - Bukhan, Yongma, Gwanak, Deokyang.

From long ago, streams and rivers flowed through valleys in those mountains down into the city. The people in the growing urban areas constructed bridges over these waterways - stepping stones, single-plank bridges, mud bridges, wooden bridges and stone bridges. While streams and rivers divided the people and the communities, bridges did the exact opposite: They connected people to people, villages to villages.

Stepping into the palaces

Other bridges were more symbolic, for instance, the bridges at the entrance of royal palaces. Once inside Gyeongbok Palace, you have to cross a bridge to get to Geunjeongjeon, the main hall where the king conducted state affairs. You have to do the same at Changgyeong Palace nearby. Historians say those bridges symbolized the Confucian-inspired philosophy that vassals must cleanse themselves of self-interest and greed before reporting to the king and discussing state affairs.

According to the history book “The Cheonggye Stream is Alive” by Lee Kyeong-jae, published in 2002, there were 86 bridges in Seoul before 1910 when Japanese colonial rule began. After 1945, when the colonial period ended, there were about 300 bridges, the author claims.

It’s hard to say exactly how many bridges exist today in Seoul, but award-winning photojournalist Choi Jin-yeon, who published a book on old Korean bridges titled “Old Bridges, Scenery in My Heart,” asserts there are about 70 old bridges in Korea.

How the author defines a bridge to be “old,” and whether or not he included small, nameless bridges is not that clear, but no one can doubt that old bridges have lost ground in the city - and most likely in people’s hearts, too - during Korea’s industrialization and city development projects.

Choi features dozens of bridges in his book, which he came upon while photographing Korea during his 20-year career. But Choi isn’t the only one who is enamored with the beauty in bridges. Earlier this year, Gallery Kunst Doc in Jongno held an exhibition on photos specifically of bridges crossing the Han River. Talking about the 25 bridges over the Han River, Lee Deuk-yeong, the photographer, said “he wanted to show what beauty these bridges have and how they harmonize with the surrounding.”

Bridges were also high on the agenda when the Cheonggye Stream restoration project began in 2003. The stream has figured in history from the beginning of the Joseon Dynasty (1392-1910) and played a key role in the lives of the people for hundreds of years since. 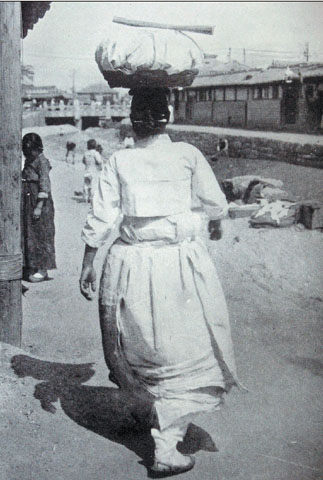 Bridges were very much a part of life since this was where people would wash and do the laundry. They named their villages after the bridges and passed on tales related to the bridges to their children. Provided by Myongji University-LG Yeonam Library

After the Korean War (1950-1953), however, the area along the stream became a slum, filled with shabby makeshift houses and trash, prompting the government, keen on modernizing and industrializing post-war Seoul, to cover up the stream with concrete and erect an elevated highway.

When the restoration project was completed in 2005, 22 bridges had been restored based on historical records.


Tales from the past

Since then Seoul city government has been using historical tales that pertain to these bridges, some of which date back 600 years, to trigger interest in the newly-restored stream among both Seoulites and tourists. 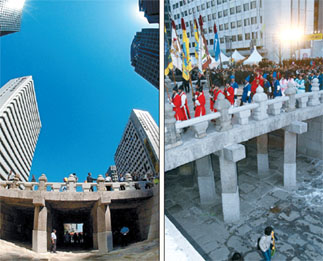 Above left and right: Gwangtong Bridge, which used be the widest bridge at Cheonggye Stream, was restored in 2005. The traditional folk game of “bridge stepping” was held the following year to commemorate the restoration. [JoongAng Ilbo]

Officials have been running a storytelling program at bridges over the stream since last year. According to Gang Shin-jeong, who works for the city government, the program has been expanded this year to four bridges, compared to two last year.

At designated hours every Friday, Saturday and Sunday until mid-November, storytellers will be recounting tales related to the bridges. (For more information, visit www.sisul.or.kr.)

One of the oldest and most famous bridges crossing over Cheonggye Stream was Gwangtonggyo (Gwangtong Bridge). It was originally a mud connection but after it was destroyed in heavy rains King Taejong (1367-1422) replaced it with a stronger stone bridge in 1401. For the construction, Taejong ordered people to use a dozen of high-quality stones with decorative carvings, which were originally made for the tomb of Queen Sindeok, his stepmother. After his father died, the king moved his stepmother’s tomb farther away from the palace, and the stones were left behind. People can see today how some of the stones are upside down. Based on this and other historical anecdotes, historians believe Taejong disliked Queen Sindeok. She is now buried at the Jeongneung Royal Tomb, listed as a Unesco world heritage site, in northern Seoul.

Back then, Gwangtong Bridge was the widest bridge at the stream, but today’s restored version is not. In fact, it’s one block east from its original site. Gwanggyo (Gwang Bridge) stands in the original site, near Jonggak in Jongno, today, where the Bosingak bell pavilion stands.

Another famous bridge at Cheonggye Stream is Supyogyo (Supyo Bridge), which was built in 1420. It was one of the bridges most frequented by the people of Joseon, historians say. It was also where the people enjoyed the “bridge stepping game,” one of Korea’s folk games where people would gather and step on bridges on a full moon day, believing the act would bring good fortune.

Supyo Bridge is the only one in the area that retains its original form, as it was moved to a park elsewhere when the stream was covered with cement and the highway was built.

The bridge standing near the stream in Jongno today is a copy of the original, which is a city-designated cultural property (Tangible Cultural Property No. 18).

Interestingly, Korean old sayings often associate bridges with beggars, and Ogansugyo (Ogansu Bridge) played a part in creating that perception. During the Joseon Dynasty, the capital was surrounded by a city wall punctuated by city gates. Ogansugyo sat near the boundary. East of the bridge was inside the capital, while west of it was outside. Many beggars settled here, forming some sort of a recognizable community. The bridge also functioned as a water gate, through which Seoul’s sewage would flow, which only added to the “filthy” image of the bridge.