History, via the camera lens

History, via the camera lens 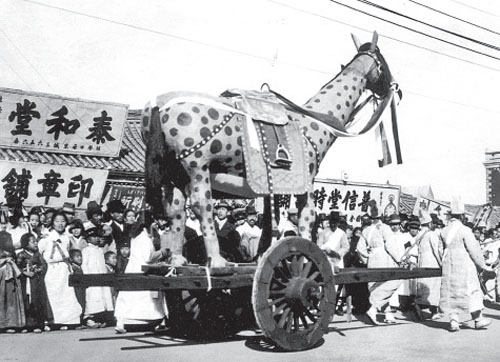 Correspondent Albert Taylor took this photo of King Gojong’s funeral on March 3, 1919. The horse, made of bamboo trees and paper, was only used for the funerals of kings and queens. Provided by Seoul Museum of History

Historic photographs capturing events ranging from King Gojong’s funeral to a mass rally in support of Syngman Rhee are on display at the Seoul Museum of History in central Seoul.

The exhibition shows the transformation of the city over the years as seen through the eyes - and more specifically the camera lenses - of three foreigners at different time periods. Albert W. Taylor (1875-1948), a reporter, attended the funeral of King Gojong (1852-1919) and observed the independence movement spreading around the nation in 1919. Fred W. Dykes, 81, a member of the U.S. infantry, witnessed the political turmoil in Korea following the country’s independence from Japan. And Motoyuki Nomura, 78, had a firsthand view of Korea’s economic growth in 1970s and early 1980s. About 120 of their photos are on display.

Taylor lived in Korea for a bit as a child and later came back to the country as a correspondent for the American news agency UPA, which later became UPI. He wrote about the independence movement on March 1, bringing this historic event to the attention of the rest of the world. As a journalist, he also took pictures of the king’s funeral on March 3. These rare photographs capture images of the people who gathered to watch the funeral march in Jongno District. There are also five pictures of Seoul that Taylor took from Mount Inwang on display. The photos are connected to each other, creating an expansive panorama of the city that stretches 12 meters (39 feet). While here, Taylor lived in a Western-style mansion in Haengchon-dong in Jongno. The 20 photos by Taylor were donated by his son Bruce, who is now 78.

Dykes served as a foot soldier in the Seventh Infantry Division in Seoul from December 1946 to May 1948. He took pictures of a mass rally in support of Syngman Rhee, who returned to Korea in 1947. One of the black-and-white photos on display shows the gate to a Japanese shrine, one of many examples of Japanese colonial architecture at that time.

Nomura volunteered to help the poor living in slums along the Cheonggye Stream. He came to Korea in 1968 and decided to devote himself to helping the disadvantaged in Korea. Later, he returned 50 times between 1973 and 1985 for volunteer work. While he was here, he took pictures of central Seoul and the stream.

The slum was formed after the Korean War (1950-1953). Those who came to Seoul from the countryside to look for jobs and refugees from North Korea started living in the area.

The exhibit also includes an actual Nazi flag that flew atop the Seoul City Hall building alongside the Japanese national flag until 1945. The flag is being shown to the public for the first time. Roger Mayotte, an American soldier, donated it in 1945.