Skin is in at theaters in Daehangno

Skin is in at theaters in Daehangno 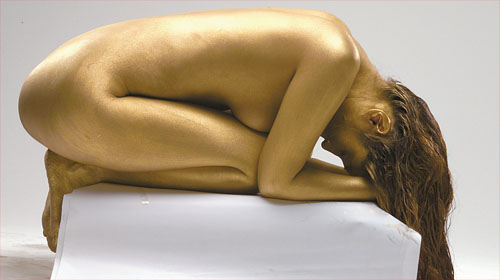 A scene from “The Professor and the Female Student.” Provided by the organizer


Take a stroll around the hip theater district of Daehangno and you’ll likely notice signs outside some venues proclaiming that photography is not allowed, tipping you off to the fact that something is a bit different here.

Some actors and actresses are opting to bare it all on stage in Daehangno as theaters look to push creative boundaries, draw bigger crowds and, of course, make more money.

Some of these plays have in fact become adults-only affairs, meaning parents who want to give their children some culture will have to look elsewhere.

To attend the play “La Dispute,” for instance, you must be over 20 years old and sign a release promising not to take any photographs. Break the rules and you could even be subject to criminal punishment.

Such restrictions are understandable as the show, written by renowned French playwright P. Marivaux, shows a scene where a nude man and woman face each other under bright stage lighting, which has sparked a major controversy in Daehangno’s theater community.

“We’re trying to be more experimental, so I don’t think that the actors and actresses always have to be fully dressed when they’re on stage,” said Lim Hyung-taek, producer of La Dispute and a professor at the Seoul Institute of the Arts. “We chose to show nudity in our play because we wanted to accurately portray the love between a man and a woman.”

La Dispute, which took the stage in August, has set a box-office record and performed to a sold-out crowd every night, prompting the organizer to extend its run through Oct. 24 - nearly three weeks later than initially planned.

And then there’s “The Professor and the Female Student,” an upcoming play that focuses on an inappropriate relationship between a teacher and his pupil. In this show, the actors and actresses are completely nude on stage. Whether audiences respond as enthusiastically as they have to La Dispute remains to be seen, as the play goes on stage next Friday.

Some productions featuring elements of nudity have hit choppy waters, however.

The production “Oh! Please” came to an abrupt halt after just five days on the stage last month. It was immediately buried under an avalanche of audience complaints surrounding the short length of the play and the fact that it didn’t feature as much nudity as originally advertised. The organizers quickly decided to pull the plug.

There have been some side effects of this trend for other performances, some of which get mistaken for being “nude theater.” And of course there’s sometimes backlash when an ample amount of skin makes its way to the stage.

“Rashomon,” an adaptation of a 1950 period film by Akira Kurosawa of the same title, has seen some of this controversy. The play is about a thief that kills a samurai and sexually abuses the samurai’s wife. “We couldn’t take out the scene where the wife gets sexually abused, so we tried to minimize the amount of nudity. I don’t understand why this is such a big deal,” said stage producer Ku Tae-hwan.