A play that asks not if we’ve evolved, but how

A play that asks not if we’ve evolved, but how 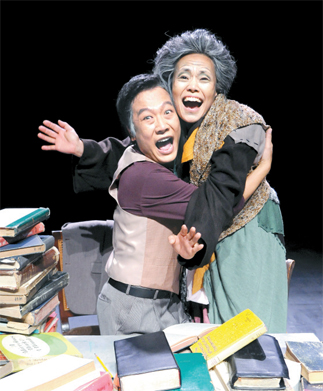 A scene from “The Turtle of Darwin”. Provided by the Seoul Performing Arts Festival

The subject of evolution has been the source of controversy for the last two centuries. Are people created by God or have they evolved from monkeys? However, Spanish writer Juan Mayorga, 44, asks an even more profound question in his black comedy “The Turtle of Darwin” - Have we evolved for the better?

A woman named Harriet shows up at the door of a history professor claiming she is a 199-year-old turtle. She also claims to have witnessed historic events from the trial of Alfred Dreyfus to the fall of the Berlin Wall. As her story unfolds, the professor begins to believe her and tries to use her knowledge of history for his own benefit. Meanwhile, his wife, Betty, and a doctor have different ideas. They want Harriet for themselves. In the end, it is the selfishness of the three characters that brings about their demise.

All of this proves to be a bitter lesson for Harriet, who says that tens of thousands of years of evolution have produced humans capable of many things, but they have evolved into the cruelest of creatures willing to do anything to satisfy their greed. She has waited almost 200 years to become human, only to discover their brutality, and she asks the other characters to consider the people in the world who are still starving or in great danger.

Mayorga created this piece in celebration of the 200th anniversary of the birth of Charles Darwin and the 150th anniversary of the publication of his book “The Origin of Species.” The writer frequently uses animal characters in his plays because, as quoted in an interview, “As Harriet says, many people are either treated like animals or act like them.”

This production of the play was the inaugural performance of the Ninth Seoul Performing Arts Festival, which runs through Nov. 21. The festival consists of 40 performances by 40 groups from 12 countries and is presented at six venues in Seoul. For further information, call (02) 3673-2561~4 or visit www.spaf.or.kr.