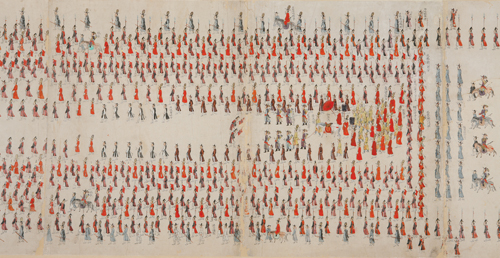 “Royal Procession to the Royal Tomb at Hwaseong” depicts King Jeongjo’s visit to Hwaseong fortress in honor of his mother’s 60th birthday. Provided by the National Museum of Korea

We hold ceremonies for the milestones in life - birth, death, graduation, marriage, anniversaries, special appointments. Some are formal, some less so, but there are always prescribed rules for how they play out. A baby’s first birthday cake and the blowing out of candles, and the exchanging of rings and vows and gifts of silver and gold are rituals practiced in Western culture. They are based on long-forgotten traditions handed down through the years.

Some of the most detailed records of traditional Korean ceremonies come from the Joseon Dynasty (1392-1910). These include records of rituals for the royal family, the aristocracy and commoners.

An exhibition titled “Scenes of Banquets and Ceremonies of the Joseon Period” at the National Museum of Korea, narrates some of these ceremonial practices and displays items that were used therein. It consists of documentary paintings, writings, costumes and crafts that capture the essence of the banquets held during this period. The exhibition is part of a series of events being held in honor of the museum’s 100th anniversary this year.

“The 100th anniversary is an event for celebration and we wanted to show what kinds of celebratory rituals our ancestors had as documented in records from the Joseon era,” said Hwang Ji-hyun, a curator of the National Museum of Korea.

One of the most notable items on display is a 46-meter-long (150 feet) roll painting called “Royal Procession to the Royal Tomb at Hwaseong.” It depicts King Jeongjo’s visit in 1795 to the Hwaseong fortress in Suwon, where the tomb of the king’s father, Crown Prince Sado, was located. The eight-day trip was taken in celebration of the queen’s 60th birthday.

The painting includes images of soldiers and guards, the king, his mother and other members of the royal family.

Another painting titled “Congratulatory Ceremony of the Crown Prince’s Birth” shows the ritual held for the birth of King Sunjong (1874-1926), who was the second son of King Gojong and Queen Myeongseong and the last king of Joseon. It shows a celebratory gathering of officials at the main hall in Changdeok Palace.

One of the most elaborate documentary paintings in the exhibition is “Royal Banquet in 1848.” This shows the festivities held for the 60th birthday of Queen Sunwon at Changdeok Palace in 1848. Four rituals were conducted over a three-day period and the painting depicts the grandeur of the celebration.

Among the pieces that depict the rituals of commoners is an 18th-century painting titled “Celebration of the 60th Anniversary of a Wedding.” The 60th wedding anniversary celebration was important because it could only be held when husband, wife and children were healthy and prosperous. The painting portrays the excitement and sincerity of the people as they enjoy the celebration, and stands in contrast to the royal documentary paintings, which depict more formal occasions.

The “Queen’s Highest Ritual Vestment” (the one on display here is a reconstruction) was considered the most elaborate piece of ceremonial clothing a queen could wear. It is embroidered with images of 153 pheasants in blue, red, black, white and yellow. These five colors represent the five cardinal points of north, south, east, west and center. The pheasant is a symbol of intimacy and growing old together.

One of the items on display is the “Gilt-Gold Book of Appointment by Emperor Gojong.” This is a golden plate produced in 1897, after the Joseon Dynasty became the Korean Empire (1897-1910). It was used for the ceremony held when Crown Prince Sunjeong was made prince of the empire. Royal seals used by Emperor Gojong are also on display.

Also included in the exhibition is a ceremonial piece of pottery. “White Porcelain with Dragon Design in Underglaze Cobalt-Blue” is a large jar from the 18th century that was used as a vase for holding flowers or a vessel for storing alcohol used in royal ceremonies.

The exhibition continues through Dec. 6. It is held on the first floor of the museum’s permanent collection building. Hours are 9 a.m. to 6 p.m. on Tuesdays, Thursdays and Fridays; 9 a.m. to 9 p.m. on Wednesdays and Saturdays; and 9 a.m. to 7 p.m. on Sundays and holidays. The museum is closed on Mondays and on the first day of each month. Admission is free. For more information, call (02)2077-9000 or go to www.museum.go.kr/EngMain.do.